It’s Not the Chilli, Stupid! 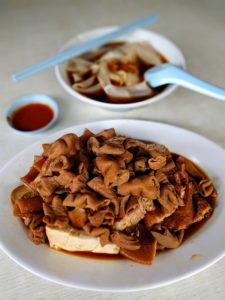 Overheard a chef talking about his favorite food on the radio yesterday.

People assume that chefs know what is good food so it is only natural that people are curious to find out where they go to eat.

So there was this chef – I detest that word, to be honest, any cook who calls himself “chef” is either ignorant or an egomaniacal retard – telling the interviewer that his favorite dish is kway chap from a stall in some housing estate in Singapore and the reason he likes that dish so much is because of the stall’s chilli sauce.

The “kway” refers to the noodles and the “chap” refers to a mixture of the pig innards, tofu, etc. In the photo above the “kway” is in the background.  The tiny dish contains the chilli sauce.

Singaporeans are very accustomed to dipping their food into a dipping sauce – either chilli sauce or soy sauce.

But the sauce does not a dish make!

You can have the best chilli sauce in the world but if you dip shit into it, shit remains shit. Good sauce doesn’t turn shit into gourmet cuisine.

Too many Singaporeans are too sidetracked by the sauces that accompany food.

I’m sure this is not the first time you hear of morons saying that a particular dish from a particular stall is good because “the chilli is very nice.”

Why the need to spice up everything? Especially food that is not Indonesian, Malaysian or Thai? A friend of mine would ask the stall to add extra chilli in her noodles, to dump a huge dollop of tiny pork lard bits into the bowl as well. In the end her bowl of bak chor mee (minced pork noodle) tastes nothing like the way it is supposed to taste.

And these people call themselves chefs.

I can only shake my head.