Tahlequah and her Baby 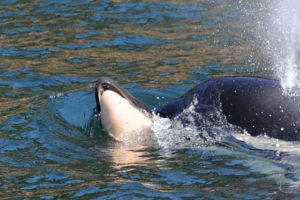 A pod of 75 killer whales, or orcas, roams in a huge territory that includes waters off Seattle, Vancouver, and Victoria, British Columbia. Orcas are among the earth’s most socially sophisticated animals. They live in matrilineal groups that include four generations, with the “grandmothers” in charge.

J35, a 20-year-old mother whale from that pod – nicknamed Tahlequah by whale watchers – gave birth on July 25th, after 17 months of gestation. (Orcas gestate for anything from 15 to 18 months.)

The 400-pound, orange-tinted baby that wriggled out of Tahlequah that morning was the first live birth in the pod since 2015.

But the baby died 30 minutes later.

However, Tahlequah did not let her emaciated calf sink to the bottom of the Pacific, but rather balanced it on her head and pushed it along as she followed her pod.

This is an animal that was grieving for her dead baby, and she didn’t want to let it go.

The hours turned into days, and still the next day, and through the weekend, and into the next week; the grieving mother was still seen pushing her baby to the water’s surface.

She was forever picking up the body as it sank, hoisting it out of the water to take a breath, and repeating.

Tahlequah carried her dead calf through the choppy Pacific Ocean in a journey that has astonished and overwhelmed much of the world.

She finally dropped her dead calf, which she’d been pushing with her head for at least 17 days and 1,000 miles off the Pacific Northwest coast, in an unprecedented show of mourning.

This tour of grief has struck an emotional chord in many of us and made us lachrymose.

The death and loss of a child is frequently called the ultimate tragedy. Nothing can be more devastating.

Tahlequah’s behavior was heart-rending. But other orcas, and similar cetaceans like dolphins – and even primates like gorillas – have been seen apparently mourning their dead, though this is by far the longest recorded example of such behavior.

People wrote poems about Tahlequah, and drew pictures. People lost sleep wondering about her. A scientist cried thinking of her. Deborah Giles, research scientist for University of Washington Center for Conservation Biology and research director for nonprofit Wild Orca, said “I am absolutely shocked and heartbroken…I am sobbing.” Tahlequah also inspired politicians and essayists – and a sense of interspecies kinship in parents who had also lost children.

Scientists say that anthropomorphism (projecting our own feelings onto animals) could even be harmful, especially when we evaluate their inner lives on our own terms. Try patting a wild lion because it looks like a cute cat that craves affection and see where that gets you. But studies have found that orcas really do possess high levels of intelligence and empathy, and emotions that may not be totally alien to our own. Science has proven that the orca brain is more elaborate than ours. The orca’s paralimbic lobe is highly developed, as is its insular cortex, both of which relates to social emotions and awareness. Like the human brain, the orca brain contains von Economo neurons: rare, specialized cells that relate to empathy, among other human-like emotions.

Often, in reality, animals are more human and humane than us.

Recently, a humpback whale and her calf were chased by five male whales swimming off the coast of Flinders Bay, on the southwest coast of Western Australia.

A pod of bottleneck dolphins showed up and surrounded the female humpback to protect mother and child.

One of the dolphins even flashed its teeth toward the male humpbacks in a sign of aggression.

Success for one of the males could have separated the mother from her baby, leading to the calf’s death.

But the dolphins intervened and both mother and child remain safe.

They are lots of lessons we can learn from nature.

But we MUST learn.