Fermented tofu (bean curd) has been unfairly called “stinky tofu” because you can catch a whiff of the dish from afar. The dish has gotten an undeserved bad rap mainly due to the exaggerated western reaction to the dish. But the uniqueness of fermented tofu is when you eat it, there is absolutely no unplesant smell, a fact conveniently ignored by the drama kings and queens. Compare that to blue cheese, for example – which I enjoy, by the way – and you’ll realize the difference: blue cheese’s stench can be said to be really foul compared to that of fermented tofu.

This can’t stop multitudes of clueless westerners making fun of the dish, and uttering absolutely idiotic, insulting, insensitive and rude comments about it. Voyeuristic TV shows for those with very low IQ, like the Survivor series, show westerners yelping and howling and puking when asked to eat Filipino balut or sea cucumber or Chinese century eggs. How dramatic! I’m sure these over the top behaviors helped with the ratings. Even if those retards on TV were not acting, their reactions show a false sense of cultural superiority at its worst. How would the Sardinians feel if I make jokes about their delicious Carsu Marzu (only to be eaten when the maggots are present and alive and crawling) or how would westerners in general feel if I condemn them for eating veal – meat from newborn calves? What if I feign a heart attack when confronted with the super strong odor of  Surströmming that some Swedes still eat? How would my French hosts feel if I make a face when they serve me foie gras? After all, it is liver from geese that have been forced fed until their livers enlarge abnormally to enormously monstrous size?

No culture should deride another for its food. Period.

Fermented tofu is usually served fried, with pickles but I do enjoy this spicy soupy version from Taiwan: 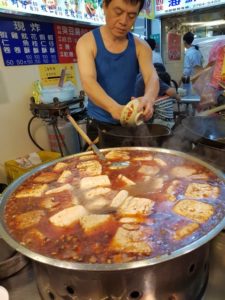 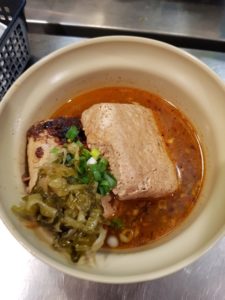