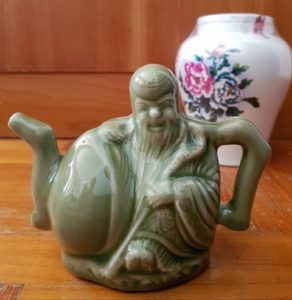 In Chinese culture, serving tea to a guest is an act of respect and obeisance; and as a guest, it is an honor to have tea poured for you.

If I serve you tea and then pour myself a cup as well, and we drink together, what are the chances of you dropping dead instantaneously? After all, it is the same tea from the same teapot.

Now, now, don’t forget the Chinese are great strategists and master schemers. China is what it is today, not because the Chinese are stupid. They have learned well from all those foreign countries (like the ultra-evil and covetous British) who have raped and plundered and pillaged their country in the past. I am still incandescent with rage learning how these reprehensible foreign forces burned the Summer Palace in Beijing to the ground in 1860. They did this claiming that their envoys were tortured by the Chinese.

The truth of the matter was that the 1842 Treaty of Nanking (referred to by the Chinese as one of the many “unequal treaties” they were forced to sign with the bullying foreign forces) failed to satisfy British greed. England and her allies demanded more. In fact, they insisted that China must forgo its sovereignty and surrender and so they sent two British envoys (Henry Loch and Harry Parkes) to “negotiate” China’s capitulation. Loch and Parkes returned from the confrontation alive but 20 soldiers they took along lost their lives due to Chinese opposition. (This was no negotiation – you don’t show up at the negotiating table with armed troops!) For this, the British and their lackeys set fire to the Summer Palace. (The modern day equivalent is Chinese president Xi Jinping asking for England to stop being a country and to come under Chinese rule and if resistance is shown, to burn down Buckingham Palace.)  It took three days to raze the Summer Palace to embers. Looting was encouraged – the loot was an established part of army pay – and many of the treasures stolen and snatched away are still housed with pride in some of the finest British and French museums today. A Pekingese dog captured from the Palace was even presented to Queen Victoria as a gift.

What do I think of Western civilization?

Back to the teapot – I know of a few Englishmen who would benefit from what I would have loved to pour from the second compartment of the teapot.

You see, this teapot of green glazed porcelain I bought in X’ian is actually a “trick” teapot! Inside are two separate compartments, and depending where you place your fingers – either covering one concealed hole or covering another concealed hole – you can get the teapot to pour out of either internal compartment. It is the perfect teapot to get rid of an unsuspecting “frenemy” – oh, there are some many of these scumbags in my life – since you could pour out some tea for yourself and drink it quite safely (provided you had covered the correct hole!) and you could then pour a drink for your arch-nemesis, and he would unknowingly get what was in the second compartment, perhaps a nice dose of poison to dispatch him to the nether world.

It is no wonder that the teapot has been nicknamed The Assassin’s Teapot. I know of several Englishmen I would love to throttle, but this neat teapot would do the trick! Saves my hands from getting dirty!

Of course, if your intention is less diabolical, you could pour tea from one compartment and coffee from another; both beverage would emerge from the same spout anyway, and you can then claim to be the next David Copperfield or circus clown.

Easier than being a PAP politician.