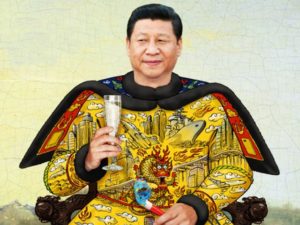 Xi Jinping is a power-crazy despot.

His hardline stance towards the volatile orange man-child in the White House puts the world in peril.

The Third Plenum of the 11th Central Committee of the Chinese Communist Party in 1978, when Deng Xiaoping was in power, triggered the transformation of China to what it is today.

Xi considers himself Deng’s heir but a trade war with the US is what Deng would have avoided.

That’s not the only thing he has done to go against Deng. He has manipulated the Chinese Communist Party to reverse the term limits put in place by Deng by having everyone voting for him to be president for life. Yes, Xi is president for life. Even Lee Kuan Yew knows how to step down. (Okay, so he was pulling the strings at the back, but…)

Building a messianic-like atmosphere around himself, Xi made sure “Xi Jinping thought” is incorporated into the Chinese constitution. Media coverage of Xi’s pronouncements are fawning and reverent. China’s toadying press probably thinks his farts smell like perfume.

Xi promotes the idea that following Mao Zedong and Deng, he is China’s third great leader. This ignores the extent to which Deng’s reforms marked a deliberate and profound break from the cult of Maoism. Deng’s goal was to free China from the lawlessness and poverty created by the Cultural Revolution and to unleash individual initiative and innovation.

Deng said on December 13th 1978 that China cannot have a culture in which officials “dare not say a word or take a step that isn’t mentioned in books, documents or the speeches of leaders.” 40 years later, Chinese officials once again find themselves obliged to genuflect before the thoughts of the party leader. Will they soon bow and kowtow to Xi as they did in the past to tyrannical and oppressive emperors?

Deng Fufang, Deng’s son who was crippled by the Red Guards during the Cultural Revolution, said last September that China’s priority should be to get its own problems fixed; his comments were viewed by analysts as a rebuke at Xi’s international ambition such as his grandiose “Belt and Road Initiative.”

We live in interesting times indeed.

They say that’s a Chinese curse, though I found no evidence that it actually is.