In October 2019, I read the following on GQ Tobaccos’ site: 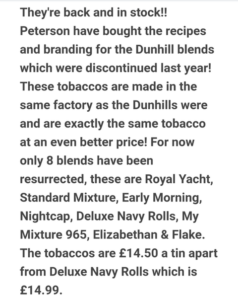 Change is a constant in the world of kapnismology.

No wonder when I met Sykes Wilford, President and CEO of Laudisi in Chicago a few months ago, he was beaming from molar to molar.

Indeed, for pipe tobacco, the twists and turns in the industry will put any Korean soap opera to shame.

Mary and Mike McNeil closed down McClelland; Mike is a happy man when I met him in Chicago – he finally even found time to get his back fixed.

When Dunhill stopped in-house blending – oh how I still miss my Mixture #73 – fans say it was day as sad as the assassination of JFK. Dunhill then outsourced its production to Murray, Sons & Company but Murray closed in 2005. A greater nightmare as discerning smokers could detect subtle differences in how the tobacco smoked.

British American Tobacco, the owner of Dunhill pipe tobacco brand then appointed Scandinavian Tobacco Group to produce its tobacco. Then this year, Dunhill tobacco ceased production. (Of course, this led to a buying frenzy just like how all McClelland tobacco were snatched up and being re-sold by money-grabbing opportunists at many times their prices.)

But all is not lost! German manufacturer and distributor Kohlhase & Kopp has started a new line called Heritage as part of their Robert McConnell range; those privileged and lucky few who sampled them in the third quarter of this year claimed they are very close to the Dunhill blends. Thumbs up! But wait, before we dance and jump with joy, do note however, that production has stopped last month as these tobacco cannot be marketed yet, due to – I can only suspect – maybe legal issues.

But things may change.

The pictures below – courtesy of Bodo Falkenreid, whom I visited in Munich last week – will make many enthusiasts salivate! 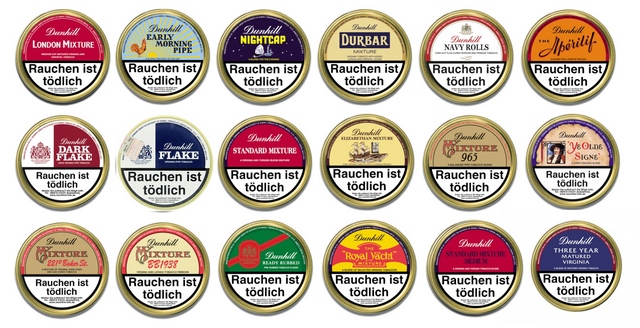 Meanwhile, to add to the intrigue, here’s a whole family of Dunhill clones by Wellauer: 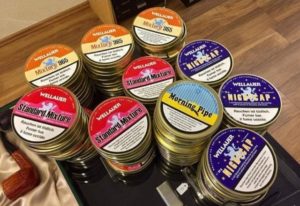