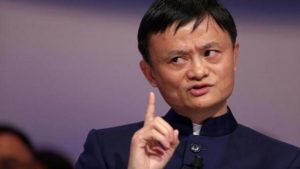 The doyen of unsolicited nonsensical advice.

In this shallow world we live in, if you are a billionaire, people will line up to smell your farts.

If you have the money to act in your own kung fu flick or ride around on a motorbike or make a fool of yourself at your company function, people think you are God.

Jack Ma delivered a stupid speech at Davos and people went gaga over it.

Jesus, people are so easily impressed.

Never mind what he said was utter crap.

He said “When you are 20 to 30 years old, you don’t know what you’re doing. You think you can do anything, But actually you can’t.”

What baloney. It’s an insult to think that young people are clueless and stupid.

Okay I’m not a billionaire but look at Steve Jobs and Mark Zuckerberg, they knew what they wanted to do. Zuckerberg was 23 when he was listed in Forbes list of billionaires. John Collison, co-founder of Stripe payment system was only 26, so was Evan Spiegel, co-founder of Snapchat.

These guys were all who knew how to use the Internet to make them wealthy. People of my generation had only hard work, sheer grit and determination.

Jack Ma also said a graduate’s first job is critical. Graduates need not join big, famous companies, instead they should look for a good boss to learn from, a good boss “that can teach you how to be a human being,” he advised.

(I honestly think it is parents who teach their kids how to be “human beings.” You don’t leave that to your bosses.)

In today’s employment climate, I have known graduates who have sent out literally thousands of application letters and are still waiting at home for an interview.

Take my elder son. He interned at PSA (Port of Singapore Authority) while at uni and he was hoping to get a job with them after graduation.

He applied to a few places and the first one to call him for an interview was Jurong Port. And he was offered a job.

He took it and then the PSA offer came.

But rather than lamenting that he didn’t get to work for the company he had wanted to work for in the first place, we are all thankful that his very first interview landed him with a job offer while many of his uni mates are still languishing at home.

Maybe they are all waiting for that boss to show up, one that would teach them how to be human beings.

And, come on, let’s not be naïve; there are no such bosses.

Most people are nice to you only when it’s convenient to them.

Nobody is going to go out of the way to teach you how to be a “human being.”

A sober lesson I learned this Chinese New Year period:

Since 2010, an old lady I know whom I shall call Madam A, a longtime resident of a home for the elderly, would receive a visit from her former neighbor on the first day of Chinese New Year.

Madam A had no living relatives. She was all alone and a visit from her former neighbor was an annual highlight she looked forward to.

This year, defying traditions, her neighbor and his family decided to travel overseas for a vacation during the Chinese New Year period.

Madam A waited all day for her neighbor and his entourage to show up.

Of course, they never did.

In the evening of the first day of Chinese New Year 2019, at exactly 11:59pm, Madam A exhaled her last breath.

This sad tale was told to me by an acquaintance of mine who is a counselor at the home in which Madam A resided in.

Sometimes a wait can be a long, futile one.

Would you rather grab the first job that comes along or go on a quest for the perfect boss?

And live on cup noodles in the meantime?

Fresh air and sunshine, anyone?

Jack Ma also said “When you are 30 to 40 years old, if you really want to try to do something yourself, try it.”

Now, why wait till you are that old? By then, married and saddled with a family to provide for and a big mortgage. is it wise to take risks at that age? Nowadays, angel investors and crowdfunding can give anyone a kickstart.

He also said “When you’re 40 to 50 years old just focus on the things you are good at. When you are 50 to 60 years old, enable young people to do better.”

Most people would have reached a stage of mastery of their craft at that age, no matter what job they do, that is, if they have been at it for a while but Jack Ma seemed to be saying “When you hit 50, step back and play dead.”

If my father had stepped back and play dead at 50, he wouldn’t have been the millionaire he is today.

Ray Kroc opened McDonald’s when he was 52.

How old are most Japanese politicians?

The average age of Japanese politicians is 55.

If they had play dead at 50, Japan would be over run with idiots like Macron of France and Trudeau of Canada who are fucking things up in their countries big time.

Then Jack Ma landed the killer punch by saying “When you’re over 60 years old, spend time with your grandchildren.”

Colonel Sanders franchised Kentucky Fried Chicken when he was 66.

Mahathir made his comeback in his 90’s.

Both octogenarians have handed over to the younger generation – on paper only – but they are still actively involved in their businesses, behind the scenes.

Play with grandkids? Of course we do that. You don’t have to tell us to do that.

I believe Jack Ma is dispensing advice based on his own life.

As a kid growing up in Hangzhou he would look out for tourists at the beautiful West Lake to practise his English.

He later made it to school and received formal education.

But he failed to get into any job he aspired to get.

So he turned to entrepreneurship. He started building his company when he was in his 30’s, then switched from CEO to executive chairman in his 40’s and at 54, is about to let go of the reins to focus on philanthropy.

Same year I stepped down from the corporate world.

Except that I didn’t step down to focus on philanthropy.

Nope, I ain’t giving nothing away.

I stepped down to focus on smoking the best cigars in the world.