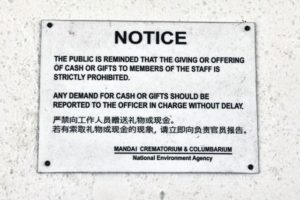 These days I live in fear.

I barricade myself at home.

I make sure all the lights are off.

I want to give the impression that no one’s in.

I dread hearing my doorbell ring.

I jump out of my skin when hearing the slightest sound in the middle of the night.

I am afraid they will come and take me away.

I’m scared shitless that the CPIB – Corrupt Practices Investigation Bureau – will arrest me.

Over the Chinese New Year period I have given ang pows to two Town Council employees who are in charge of garbage disposal.

Ang pows are red packets containing some money and it’s part of Chinese culture and tradition to give them out to relatives and friends during the Chinese New Year period to wish them luck. These red packets are also little gesture of thanks.

When I lived in the US, nobody would think of arresting me for leaving fruitcakes and bottles of wine for the concierge staff at my apartment.

But this is Singapore!

For the third year running, the top seven countries in the Corruption Perceptions Index 2018 consist of the four Nordic nations – Denmark, Finland, Sweden and Norway – plus New Zealand, Singapore and Switzerland. All score between 84 and 88 points out of 100 on the index. No other Asian country is among the top seven.

Corruption was rife during the British rule. Colonial officials had to be bribed to get their asses moving. Down and up the hierarchy, everyone in the chain of command was on the take.

But the Singapore government has over the years, all but wiped out corruption.

Our prime minister and our government ministers are the highest-paid in the world, this so that they will not be corrupted, said Lee Kuan Yew.

In fact, Singapore has moved up to rank 6th in a corruption perceptions index by graft watchdog Transparency International.

We attained a score of 84 in its Corruption Perceptions Index for 2017.

To lawmakers, corruption is no laughing matter.

There is no limit on the amount that the CPIB can and will investigate, even if the amount is as small as one dollar. A bribe of one dollar is still an offense.

In January, a forklift operator was jailed and ordered to pay a penalty of S$4,870.50 for embarking on “a course of conduct” to obtain bribes from truck drivers.

Further investigations revealed that over time, he has enriched himself quite a bit. A dollar here, a dollar there; it all adds up.

Singapore adopts a strict zero-tolerance approach towards corruption. It is a serious offense to obtain bribes, or attempt to obtain bribes from another individual or entity. Any person who is convicted of a corruption offense can be fined up to S$100,000/- or sentenced to imprisonment of up to 5 years or to both.

So I worry that the Town Council employees accepting red packets and me giving them might land us in hot water. We may be charged.

Especially when The Straits Times has just revealed that some unfortunate people have just gotten into trouble for accepting red packets.

“Workers at crematorium in trouble over red packets” screamed the newspaper’s headline on February 2nd.

The Straits Times reported that crematorium workers who accepted red packets from bereaved families are now in deep kimchi with the authorities over this practice at the government-run Mandai Crematorium. Just recently, more than 20 workers from private funeral businesses as well as crematorium workers have reportedly been hauled up by the CPIB. Checks by The Straits Times found at least three workers from different companies were called in for questioning by the CPIB not too long ago, while another two were questioned as witnesses of the practice. The three were later released on a bail of S$20,000/- each.

Chinese families willingly give such packets, which are seen as an auspicious gesture to “bless” the workers with good luck. More so during the auspicious Chinese New Year period. Families typically give sums ranging from S$2/- to $50/-.

Death is still a taboo subject among many races, and during a wake, Chinese families observe the tradition of issuing red thread to those who attend to symbolize good luck and chase away anything that is bad. Sweets are also given out at funerals to ward off negative energy.

Those who attend wakes and funerals also tend to voluntarily provide some monetary contributions, known as “white gold,” to family members to help allay funeral expenses.

Hence, the intention behind giving crematorium workers red packets is more a cultural thing and also a token of gratitude rather than corruption or attempts at bribery, as families are not compelled to give such packets and do so on their own free will.

The CPIB shouldn’t be wasting taxpayers’ money to spend time and resources to go after people who are just following tradition.

Do you need an axe to kill an ant?

The CPIB should focus more on what really matters and not make mountains out of molehills.

Yes, go after the big fish!

Now you understand why I live in fear these days.

I don’t want to go to jail!

According to Sunday Times of February 10th, since the  news emerged of the probe, the CPIB has published on its website a new section on whether the local practice of giving small tokens of appreciation is allowed.

“The act of giving a genuine gift (such as red packets) in itself without any corrupt intention is not considered corruption.

“However, if the gift is given secretly, or in a manner that attempts to avoid notice or attention with a view to securing personal special privilege or advantage and more so at the expense of the recipient’s principal’s/employer’s interest (that is, resulting in a compromise of the recipient’s official duties), it may be deemed to be corrupt and hence an offence under the Prevention of Corruption Act.”

Responding, Associate professor of accounting at the National University of Singapore Business School Mak Yuen Teen said even if the red packets are given as gestures of appreciation, or as a custom after the tasks, there could be a presumption of corruption when a public servant is involved. He added that under the Prevention of Corruption Act, public servants or individuals employed by the Government who have given or received gratifications will be presumed to be corrupt unless proven otherwise.

One other thing: my red packets to the two Town Council workers were given without any expectation of any reciprocal action but the fact of the matter is that they now recognize me and I may receive “preferential treatment.” For example, when I walk to the garbage disposal with a broken toaster to trash, being helpful, they may rush to me and take it out of my hands. So when I treat someone nice and they remember me, they may go out of their way to help me, but does that mean corruption?

In its response to media queries, the CPIB advises caution with gifts that involve parties with whom one has an official relationship. While a gift given innocently and without any corrupt intention is not considered corruption, if it “is given or received with a view to secure, or to reciprocate with, for example an unfair advantage, it may be corruption.”

I will advise my grandkids NOT to give their teachers apples on Teachers’ Day.

I am dead against this guilty until proven innocent bullshit.

Prove my crime, and I’ll pay for it.

Being polite and courteous – the way I have been brought up – being respectful of authority, etc does not mean I expect anything in return. When I do that and the assumption is that I have corrupt intent and I get nailed until proven innocent, this is just pure bovine scatology.