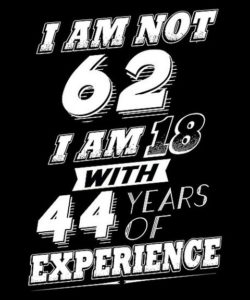 Over the past week or so, and in this and the coming weeks, I have been hosted and will be hosted to several so-called birthday meals in my honor.

Except for two occasions, nobody has asked the “birthday boy” what – and when (what time) – he wants to eat!

Most people think of their own convenience or have only their own preferences in mind.

I suspect they were using my birthday as an excuse to have themselves a good meal.

With a treasure trove of rare, aged Cuban and non-Cuban cigars and enough vintage pipe tobacco to last me several lifetimes, and a cellar chock-full of fine wines, who cares about eating with a bunch of clowns, anyway.

No one asking about my preferences is just a very small matter.

If eating swill masquerading as fine cuisine makes you happy, that’s your prerogative.

He who pays the piper calls the tune.

I shouldn’t be ungrateful.

Hope this won’t be the tone for the rest of the year though – idiots determining my actions.

2018 was a great year. Finally gotten rid of the last of the assholes in my life. Well, a boneheaded, imbecilic and extremely toxic retard mounted an attempt to make a comeback end of the year, but I managed to thwart this rectum parasite. Am so glad he (who suffers from either underdeveloped or degenerated frontal lobe, in other words, brain-damage) was finally expunged from my life forever.

Professionally, I still command 10k a day and aspire to do only ten billable days a month.

The rest of the month are days when I do nothing but just chill – consumed by wanderlust I travel, I also go to concerts, read, and catch up on movies I have missed while I was in full-time employment by watching blu-rays or Netflix. In addition, I contemplate, sip single-malt whiskies and spend time enjoying my cigar and pipe smoking.

Does age and such a lifestyle bring about inertia?

Chronic back pain continues to bug me, but well, it’s only pain, and pain is a friend, not an enemy, in fact, pain is my middle name haha. And speaking of “chronic” I realized one other thing: I have in recent years developed another chronic condition; that is, a serious chronic dislike of people in general.

I have always been grouchy and cantankerous and pride myself as a curmudgeon and a misanthrope but it has gotten much worse.

Not that I’m complaining.

I enjoy being alone more and more. My soul is at peace in silence. In solitude I find contentment. No, I’m not anti-social, I’m just anti-moron. I wish more people will shut the fuck up. The cacophony of bullshit drives me nuts. Many nobodies are afraid of silence, because not talking reveals the extent of their emptiness and shows how fake and superficial they really are. Often my visits to cigar lounges is ruined by loudmouths and self-aggrandizers who love nothing but the sound of their own voice. They talk and talk on top of their voices ad nauseum ad infinitum. Losers do this to neuter their own hollowness. That’s why I only go during a particular time of the day, but my luck often runs out as these braggarts still show up when I least expect them to. I therefore find it is now untenable to belong to certain groups and to visit certain places.

So back to the question: Does age and “semi-retirement” bring about homeostasis, before the inevitable decline?

My body is far from being weathered and worn, so the loud resounding answer is an unequivocal and categorical “No!!!” Abso-freaking-lutely NO!!! At 62 I have so many more resources and means at my disposal than ever before. These include the training I have received, my life experiences, my continuous learning, what I distilled from past failures and victories, plus lessons harvested and gleaned from my years of encounters and interactions with people from all over the world, etc. (True, I have committed some very stupid slip-ups in my life, uttered lots of crap that shouldn’t have escaped my mouth, but in all fairness, I like to think that in my lifetime, I have done a bit of good too.)

All of these combine to become solutions to what were once worrisome problems and difficulties that caused heartaches. I am a worrier, but at 62, there is not a single challenge I cannot overcome. Whether it is nasty clients, rude neighbors, fair-weather friends, double-crossers who play both sides, conniving and cunning scumbags (they don’t know Matthew 6:24) who still want to be your friend while not willing to give up being friends with people who have become your enemies, megalomaniac and thin-skinned church pastors who play politics when they get upstaged by better preachers than themselves, cyclists with death wish who hog the road, motorists with zero road courtesy, and who think they can drive in any shitty manner they want just because they own expensive cars and pay more road tax, men with tiny, shriveled penises who compensate and act out by driving huge cars and loud Harleys, crying babies in first class, unprofessional medical doctors, hypocrites in church, corrupt politicians, hospital admins and other troglodytes who don’t bother responding to emails and text messages, pathetic millennials and snowflakes who exhibit their lives as “show-reels” and who crave approval from Facebook “friends” and Instagram likes, taking selfies all the time of their bloated faces (usually faces with more chins than a telephone directory from China) and semen-infused bodies, absent relatives who only show up at wakes, funerals and weddings, ungrateful children who block their parents on social media, insensitive and disrespectful offspring – smart-alecky ingrates who know it all and who are resistant to positive feedback – or a cold, distant spouse, all these inconsequential annoyances cause no perturbance to my contented life because at 62, I am at my most powerful now. “My name is Ozymandias, King of Kings, look on my works, ye mighty, and despair!” Well not quite, but you get my drift.

Besides, what goes around comes around. The true mark of a man is when you possess in your hands the absolute power to totally crush and destroy someone – to alter someone’s destiny and fuck up the trajectory of someone’s life – but you choose instead to walk away and let karma deal with these wastrels. Yes, karma’s a bitch! And resentment is like drinking poison yourself and hoping your enemies will die. So, why harbor ill will? By any reasonable standard, I have already won life’s lottery.

What I have gone through not only become tools that continue to enhance my personal power, influence and prowess but they form a solid foundational basis, one providing me with boundless and endless personal comfort and heart-warming assurances, despite my being surrounded by Neanderthals most of the time. Collectively, everything will lead me to a future that can only be even more glorious and more complexly satisfying than they have been the decades of my life preceding this one. Yes, mine will be a tomorrow that will stagger the imagination! Even my own imagination!

Not because I have morph into a stupid old man – no, as in the Toby Keith song, I “don’t let the old man in” – but simply, given the ecstatic and magnificent splendor of my past, why would I expect any less?