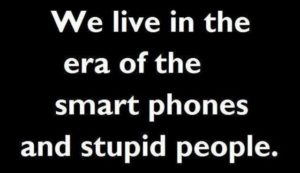 When she needed you, she would greet you like a long-lost brother. All smiles and warmth.

The very next day, when you are no longer of any use to her, she could be in the same elevator as you – and there is no one else, just the two of you – she would behave as if she does not know you.

Today, she is still with the American multinational information technology company in which I spent 10 years working for. Not only that, she is now a big shot, being made General Manager of a particular geographical region since last year.

At home, when you and a family member cross paths, you say “hi” or you smile or your facial expression indicates recognition and acknowledgement. You don’t behave as if the other person is invisible.

In the 1930s, German cultural critic Walter Benjamin, in his book, The Paris of the Second Empire in Baudelaire, wrote about the flâneur (the solitary and preoccupied stroller) who is so absorbed in his environs that he is like a lone figure among teeming crowds.

19th-century French literature refers to a somewhat similar character, the badaud (gaper or gawker) who is so intoxicated by his surroundings that he forgets himself.

Portmanteau words for such people have already been coined. Psychologists today have a name for this: “phubbing” or snubbing a person in favor of your phone.

Oh, how many times have I seen dating couples sitting at a table in a restaurant, each frantically checking their phones for Facebook updates of their friends, or posting photos to Instagram.

Oh how many times have I waited for family members to finally finish playing with their phones before I could start the blu-ray movie that we were planning to watch.

A word being used to describe such people is “smombie.” It refers to the phone zombie so fascinated by their phones that they are oblivious to the people around them.  I’m sure “smombism” can now be added to the sorry catalog of urban blight. Perhaps it will soon be an entry in the DSM (Diagnostic and Statistical Manual of Mental Disorders).

What is frustrating is, some of the people who spend an inordinate amount of time on their phones, are often the very same ones who ignore your text messages and your emails.

This is beyond rude, it is downright appalling and makes me question your upbringing.

If someone knocks on your door, or a friend, colleague or family member says “Hi, how’s it going?” an answer is expected.

Instant messaging is not instant if you take days to reply. You might as well retrograde to the days when pigeons were used. At least, when no reply comes, I can assume that your pigeon has died. If no reply comes from my text or email, should I assume that you have died?

A question asking how you’re doing should always be replied to. Even one alphabet “k” will tell me that you bother, that you respect me, that you are well-mannered.

I am sick of people who find themselves way too high above their stations to respond to a text or an email from a senior person like me, just as I am sick of people in public who are glued to their phones and walking right into me.

Maybe Singaporeans need the government to whip them into decent behavior.

In Wenzhou, China, a woman was fined for using her phone while crossing the road. She was found guilty of violating municipal regulations.

In Xi’an, the authorities have set aside pedestrian lanes for people who insist on texting while walking.

Honolulu fines you US$15/- for using a phone while crossing the street. Penalties for repeat offenders range from US$75/- to US$99/-.

It’s sad that laws are needed for common sense.

It’s sad that some people get promoted to senior positions despite their shitty behavior.