The Best Education Money Can Buy 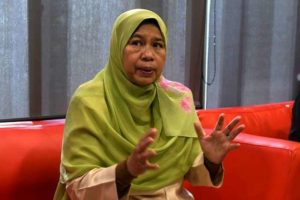 The smartest of them all: Malaysia’s Housing and Local Government Minister Zuraida Kamaruddin didn’t even go to school yet claimed to be a graduate of National University of Singapore.

In the US, news on the largest college admissions scam ever prosecuted by the Justice Department made headlines this week.

At least 50 people – including celebrities such as actress Lori Loughlin and Emmy-winning actress Felicity Huffman – have been charged with participating in a conspiracy that involved cheating on college entrance exams, like the SAT and ACT. Also, some children were admitted to elite colleges and universities, including Yale, Stanford, UCLA and the University of Texas, because their parents bribed sports coaches.

Between 2011 and 2018, wealthy parents paid a huckster named Rick Singer, self-proclaimed head of an admissions consulting service more than US$25 million. Singer would then use that money to pay a ringer to take the SAT or ACT for children. He would also bribe coaches – people in the position to recommend admissions based on excellence in sports.

We’re not talking about donating a building so that a school is more likely to take your son or daughter. I mean if you donate shitloads of money, not only can you get a school – or a hospital – to be named after you, but you can probably get even a brain-damaged retard child of yours admitted into an ivy league school. By the way if you are thinking of this route, which is perfectly legal, think big money. US$10 million won’t get you anywhere with these schools.

But if your ego is not so big and you don’t need to have a building named after you, then using rip-off artists like Singer is something you can consider.

Sports coaches who preach about fair competition and sportsmanship were in the game too. In return for bribes ranging from US$200,000/- to US$400,000/-, some coaches agreed to pretend that certain applicants were recruited competitive athletes.

In many instances, Singer even helped parents take staged photographs of their children engaged in particular sports.

In other cases, he helped them use stock photos pulled from the Internet, Photoshopping the faces of applicants onto the bodies of athletes.

Some parents spent anywhere from US$200,000/- to US$6.5 million for guaranteed admission.

It’s all about what money can buy.

Not fair? Cry foul all you want, but that’s life. It’s unfair and capricious, so suck it up, okay.

Life is not a fairy tale. If you lose your shoe at midnight, you’re most likely drunk, and you have probably been groped by some Harvey Weinstein-type lecher.

Arrests were made but none of the schools named in the court filings are under investigation for fraud. The US attorney’s office says college admissions officers were tricked.

It may be legal to pledge millions to Harvard just when your child is applying and illegal to bribe a coach to the tune of hundreds of thousands of dollars, but how much of a difference is there, really?

And what difference is there when Singapore parents are talked into “volunteering” their services – like gardening, painting the school walls, etc –  at primary schools so that their kids can get admitted to primary schools on the A-list?

Yes, we are not even talking about tertiary institutions, we are talking about primary schools! Schools our kids go to when they turn seven, the age at which they start the first year of their formal education.

Places are limited. So, genuine students who qualify are being victimized.

But the real victims are the children of parents who pulled strings to get them admitted.

I don’t think anyone should go to a school if they can’t get in on their own merits. How do you cope once you’re in?

Decades ago, a cousin of mine was admitted to a regular school. But his dad found out that the principal of a highly eminent school lived in the same neighborhood. A meeting was arranged, some schmoozing took place, something changed hands, and before you know it, my cousin was transferred into that “branded” school.

In this case, it didn’t really matter that he couldn’t study for nuts. After secondary school, the stupid oaf took over his father’s business.

When you pay beaucoup moola to get your kid admitted to a famous school, you are really saying to your child: You are a loser, you are spineless, you are not good enough to do this on your own.

You are teaching your child that winning is everything, never mind education, what is more important is to flaunt to others that you have managed to get accepted into a prestigious school.

You are telling your child that because winning is everything, therefore cheating and trickery is acceptable.

You are showing your child that self-respect is secondary to projecting an impression to others that society’s shallow interpretation of success is the model to uphold, not even a personally chosen form of success, but a corrupted and perverted version that the materialistic world subscribes to.

You are setting him up to forever explore and exploit the use of shortcuts and loopholes for the rest of his life.

You are telling him that he can beat the system through guile, networking, influence peddling, power broking and good old-fashioned bribery.

In the last few years or so, we have seen so many con men in Singapore being exposed and jailed, especially those who were heads of religious organizations, sharing one commonality: they all came from the same school!