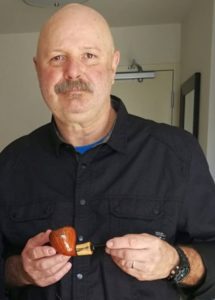 Tom Richard is the architect behind Tom Richard Pipes. Tom hails from northern Germany, close to Denmark, the pipe mecca of the world. He often jokingly refers to his pipes as “Danish border handmade pipes.”

It was Poul Winslow who encouraged Tom to go into pipe making, which he did, and in 2003, after a visit with German master carver Rainer Barbi, the first “Tom Richard Pipe” came into being, and the rest, they say, is history.

Tom’s pipes gained fame on German eBay and soon he amassed a strong following. Today, collectors from all over the world know of Tom Richard pipes. Being easily approachable, friendly and affable helps. Unlike some pipe makers – especially a few from East Asia – who think of themselves as having made it and assume an unjustified air of arrogance, Tom is humble and very human; a real pleasure to interact with.

Tom makes his pipes only out of premium briar as well as ancient morta, thousands of years old. He also often embeds rare wood such as snakewood, boxwood, rosewood, etc. He also deploys bamboo and horn.

DrMikePipes is the authorized distributor of Tom’s pipes.

Below is an example of a Tom Richard pipe:

A small selection of aesthetically magnificent Tom Richard pipes will arrive soon at DrMikePipes, as well as several very unique top-end Lee von Erck pipes, including one from von Erck’s Emperor range (prices up to S$3500/-).