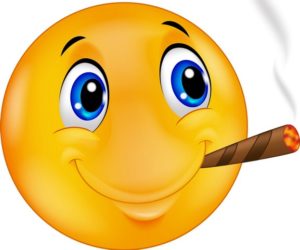 Such language is usually accompanied by emojis or emoticons.

The word “emoji” is from the Japanese e, “picture,” and moji, “character.”

Strictly speaking, an emoji is a picture – like a smiley face (see picture above) or a thumbs up – and an emoticon is something you use the keyboard to type out, like :- )

It has been said that emojis are among the most useful shorthand communication tools of the 21st century.

Emojis can be used to express personality or emotions in your texts. According to crazy people who study stuff like this, nearly half of all comments and captions on Instagram contains an emoji, and using an emoji on Twitter can result in 25.4% more engagement. (Wow, very precise indeed, 25.4%; not 25.5% mine you, but 25.4%!)

I have nothing against emojis and emoticons and don’t really have any view one way or the other about people who use them although it is frustrating sometimes when you text someone, and all the replies you get are one emoji after another. Makes you wonder if the other person is really interested in communicating with you in a meaningful and respectful manner, or just brushing you off with emojis. It’s a bit like throwing a spare bone to a stray dog.

When I changed my phone last year, I thought I would stop using emojis and emoticons altogether, just on a whim.

As a published author of eight books and a blogger known for his verbal diarrhea, I consider myself to be a wordsmith of sorts, so, I challenged myself not to use emojis and emoticons. I thought it would force me to express myself more creatively without relying on them. So instead of sending a thumbs up emoji to respond to someone bragging about his five-hundred-dollar meal at some Michelin-starred restaurant, I am forced to say something like “Lucky you, hope the meal was worth it” or something like that.

So far, I’m doing okay. I’ve also stopped using acronyms like LOL (for “Laughing Out Loud”) although just typing “hahaha” in my reply doesn’t really stretch the creative part of my brains much. And I never use short forms like “nvm” for “nevermind” or stupid, but commonly-used words like “2molo” for “tomorrow” or “wat” for “what.” I know SMS has a limit on the number of characters you can type; as a result, people shorten their words, but in WhatsApp there isn’t any limit and hence, no excuse to use all those shortcuts. Hey, I’m not some secret agent deciphering codes! I heard it drives teachers nuts because students are writing their essays using such chopped-up words!

Anyway, the next time you are tempted to hit a button and send an emoji, perhaps think of how you would say it in words instead.

I’m sure it helps prevent early onset dementia and will also make you a better communicator.