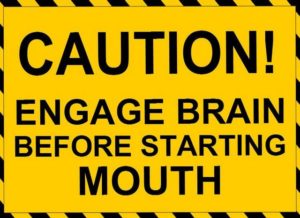 When Damai Beach resort first opened in Santubong Sarawak, the management thought that finding labor wouldn’t be a problem. The natives, like the Ibans, they figured, would eagerly grab the job opportunities. But management hit a brick wall. What was the problem? The natives had never understood the concept of work. They had never experienced what it means to have a job. They found having to dress up, to wear shoes, to be up and about alert and delivering services tedious and meaningless. Employment was an unknown concept. After all, theirs was a land of abundance with rivers teeming with fish and forests providing any food they want – with meat and vegetables everywhere. And best of all, not a cent was necessary!  Manna from heaven is free!

But the natives failed to know that other modern-day equipment like mobile phones, refrigerators or washing machines would not drop from the sky!

Their fate rests not on what they know but what they failed to know.

It took quite a lot of efforts for the natives to understand and embrace the concept of work and to realize the potential of money to better and modernize their lives.

What is hypocognition? If you don’t know, you’ve just experienced it.

Hypocognition, a term introduced to modern behavioral science by anthropologist Robert Levy, means the lack of a linguistic or cognitive representation for an object, category, or idea. The natives of Santubong were hypocognitive because they lacked a cognitive representation of employment. But so are we hypocognitive of the numerous concepts that elude our awareness. We wander about the unknown terrains of life as greenhorns more often than experts, complacent of what we know and oblivious to what we miss.

This perhaps explains why, once when I was still in IBM, an American IBMer who had never left his hometown, was catapulted to senior position here in Asia and when he visited our Singapore office, he commented – with genuine amazement – that “wow, so many of you here know how to use computers.” We had to hide our eyerolls. He still didn’t realize that I was making fun of him when he asked me how I go to work and I told him “Oh, I swing from tree to tree until I reach the office.”

If hypocognition impoverishes our knowledge, how do we escape from it? The attempt to reduce hypocognition must be a careful one, because the opposite of hypocognition is hypercognition. To suffer from hypercognition is to over-apply a familiar concept to circumstances where it does not belong. When all you have is a hammer, every problem is a nail! Cancer, for example, has a real yet complex relationship to tobacco use. But people often overextend the concept. Despite what many choose to believe, smoking does not cause every known illness in the world. It most certainly doesn’t cause ingrown toenails!

Who are most likely to fall prey to hypercognition? Experts. Experts who are confined by their own expertise. I know someone who would immediately WhatsApp me a thumbs up emoji just seconds after I have shared some material with him – be it an article, a video or a photo. It is humanly impossible to read the contents I send in such a quick time. I myself would look at it, and then respond but my friend would respond the very moment the material I sent appears on his phone. When I confront him, he claims that he has definitely read or view whatever I sent. Well, he must be the world’s fastest speed reader! My guess is that he had had a quick glance and hypercognizes what he thinks I have sent. It’s almost like even before you have finish talking, the other person is replying, and often replying to what he thinks you are talking about, which is often, quite something else; so when two persons talk, they may think they are having a conversation but both could be talking about two entirely different subjects altogether. No wonder people suffer from communication breakdowns.

As much as I dislike Donald Rumsfeld, he wasn’t being funny when he talked about known knowns, known unknows and unknown unknowns. (His memoir is entitled Known and Unknown.)