Did My Life Flashed Before Me? 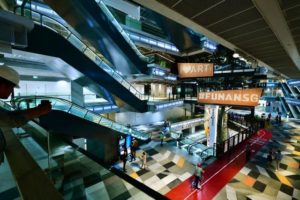 Yup, face to face with death four times in one morning!

What flashed wasn’t my life, though.

More than 70,000 e-scooters had been registered in Singapore by April 30th. That’s just e-scooters, but what about other junk like electronic bicycles, etc and what about those that are not registered?

The first demon from hell that morning was a China woman – as in a woman from China – who appeared out of nowhere and cut right into my path without any warning.

She came that close to riding INTO me.

The second one was some retard who flashed by on my right – again, no bell, no sound, and if my unsteady gait had caused me to step a little to my right I would have been hit.

The third one was another motherfucker who must have missed my back by inches – it was a food delivery fellow; again no warning. I only knew I almost met my maker when I felt the swoosh of air generated by the speed of his PMD flying past right behind me. If for any reason I had stumbled backward, I would have ended up groaning on the floor, or worse.

And the fourth one was some old turbo uncle on stealth who decided to suddenly turn left and rocketed past me. I suspect he nicked off a fingernail of mine.

And now those cretins at Funan have decided that when the mall re-opens, it will be Singapore’s only mall where cyclists will be allowed. (Touch artist’s rendition above to see an enlarged view and you’ll see cyclists wearing helmets! Pedestrians will be unprotected. Perhaps they should wear steel armor?)

I know every frigging mall wants to have its USP or Unique Selling Proposition, but to allow cycling INSIDE a mall?

How about I drive my car in? Or ride my horse in?

Those jackasses who came up with that hare-brained idea should be hanged by their pubic hair while having their heads examined. A lobotomy will be good, then throw those clowns into the zoo; they would make great exhibits.

It all started because some brain-damaged overpaid wankers at LTA started preaching about our need to build a car-lite society. Must have taken the cue from some equally imbecilic politician with shit for brains.

So all these guys are now giving up their expensive, over-priced, fancy cars to use electronic bicycles, e-scooters and PMDs and the like?

Take a look at those losers using PMDs – they all had cars before?

Give me a break!

Fat fucking hope. Those fat cat comedians at LTA are really NOT in touch with what’s happening in the world, are they?

By its efforts to reach out to educate 46,000 people in its Safe Riding Program – it mentioned that these people are unlikely to be car users  – LTA has subtly acknowledged its own policy weakness.

Neither should it indulge in fantasy, thinking that we are an Utopian society where everyone is gracious, polite and courteous.

LTA’s latest Master Plan revealed on May 25th maps out a future where Singapore will be chock-full of PMDs.

Urban transport expert Associate Professor Park Byung Joon from the Singapore University of Social Sciences said he was unsure if this sent the right signal.

“If three-quarters of the population are using PMDs, then basically it will be chaos everywhere,” he said.

“Pedestrian pavements will be like the streets of Hanoi,” he added.

“Is this something that we want? If the answer is no, then I think it shouldn’t be part of the master plan.”

Well, LTA is asking everyone to be nice.

But LTA’s appeal for PMD riders to nurture a “culture of responsible, gracious and safe path sharing” and “weed out irresponsible behavior” is naiveté of the highest order. Seriously, what the fuck is wrong with LTA?

More often than not it is those scumbags on electronic bicycles, e-scooters and PMDs that shout at pedestrians and show us their middle fingers when they think we are obstructing their passage, when they are the ones obstructing ours.

LTA doesn’t learn a crap about anything does it? Aren’t the accidents and the deaths caused by PMDs awakening LTA to some realities?

Last year in a letter to the press, I mentioned that PMDs caused about 110 accidents between January and September of 2017, involving 90 injuries and four deaths.

(On January 8th 2018, the media reported that every week, about three accidents involving users of PMDs occur on public roads and paths.)

This despite LTA issuing more than 1,700 advisories to cyclists and PMD users for unsafe riding behavior not long ago.

It’s now 2019 and there have been more than 3,700 offences committed under the Active Mobility Act over the last 12 months. This is what LTA itself revealed on May 10th.

Statistics show that nearly a fifth of these 3,700 active-mobility offences involved users who sped, rode recklessly or used PMDs on roads.

(Under Singapore’s law, PMDs cannot be used on roads. They are allowed only on footpaths and shared pathways, such as cycling paths and park-connector networks.)

One mishap left a rider dead and 32 other accidents resulted in major injuries, such as concussions and fractures.

Look at the papers: news of accidents involving electronic bicycles, e-scooters and PMDs appear so often that people don’t even bother reading about them anymore. It has become the new normal. What? Another Ah Ma killed by an e-scooter? Nevermind lah, what else is new? Shit happens. Maybe fake news lah.

And users of electronic bicycles, e-scooters and PMDs are becoming more and more blatant. One rode right into a coffee shop I was in the other day. I grabbed his e-scooter and threatened to drag him to the police station; only then did he dismount and hightailed out of the coffee shop. Not a word of apology. Instead he glared and stared daggers at me and if looks could kill, I would have died a death of a thousand stabs. I was half expecting that he would return with a bunch of hooligans to bash me up.

I was waiting. I was prepared. Too bad the asshole disappointed me. Another failed abortion with no testicles. His mother should have swallowed.

And let’s not forget that in a National Day Rally – the one where he did not roll his eyes half way into his annual harangue, made a monkey face and then collapse – Prime Minister Lee Hsien Loong painted a stark picture of the diabetes situation in Singapore. He encouraged citizens to go for regular medical check-ups, eat healthier, and to exercise more, so they won’t have to roll their eyes in the middle of whatever they are doing, make monkey faces and collapse.

The use of electronic bicycles, e-scooters and PMDs can remove the exercise component of our daily lives and takes away what little chance there is of us being physical in a manner that can be beneficial to our health.

Some may think that it is necessary to make convenient the first- and last-mile connections in our daily commute, hence the rapid growth in the use of electronic bicycles, e-scooters and PMDs, and lately of bike-sharing schemes.

And talking of bike-sharing schemes, some meatheads apparently thought it is a great idea, and well, you know the rest of the story. What happened to all those companies behind bike-sharing schemes? Scammers, most of them! Suckers lost tons of money. Companies disappeared with millions of dollars’ worth of deposits un-returned. Bicycles from bike-sharing scheme strewn all over the place were and still are an eyesore as well.

Anyway my point is that the use of such devices run counter to the healthy nation we are trying to build. Instead it contributes to a more sedentary lifestyle and consequently may result in the exponential growth of illness related to such a lifestyle. Besides, what rubbish is this “first- and last-mile connections” all about? What the hell is wrong with walking?

I see no reason to use any mobility device to move me from my house to the MRT station and back, in fact, my walk there and back is very often the only exercise I get in the day, and despite excruciating pain from a damaged spine, I persist in walking and have learned to enjoy the walks and to benefit from what exercise I get from it. See, I’m not spineless, like some people.

Let’s confine all electronic bicycles, e-scooters and PMDs to the right places!

Or create paths exclusively for them.

Wake the fuck up, LTA!

Workable solutions are needed for the problems you have created.

LTA claimed that in a recent three-month period (from February to April) it carried out about 2,260 enforcement operations and seized more than 400 devices.

Enforcement must be stepped up – offenders must be heavily and severely punished and devices confiscated right away.