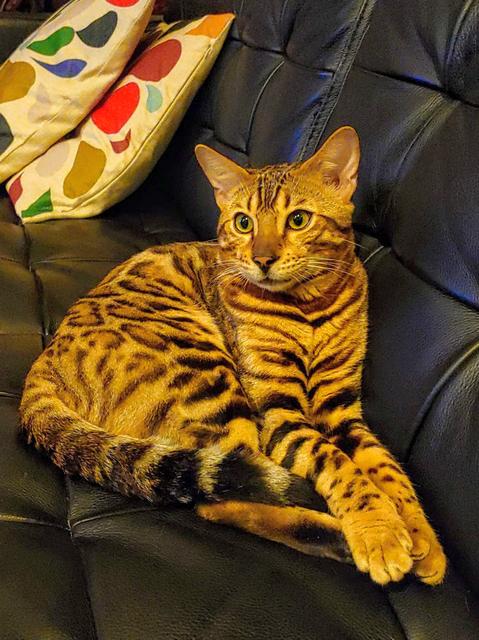 In Norse mythology, Freyr is a god-king of sorts.

In our household, Freyr is no god but is certainly king.

Freyr is a male Bengal cat who became part of our family in August last year when he was about six months old.

Dr Chen was leaving Singapore and was looking for someone to take over his Bengal which he named “Freyr.” Each of my family member overwhelmingly supported the idea that we give Freyr a new home.

Even the grandkids – who already have a dog – were enthusiastic!

And that’s how a cat became part of our family after a few thousand bucks changed hands with Dr Chen.

Here’s Freyr doing a dog imitation! Cats are way different from dogs though; they don’t come to you when called, for example, and that’s one of the reasons why people say if you have a cat, the cat becomes the master and you, the slave. 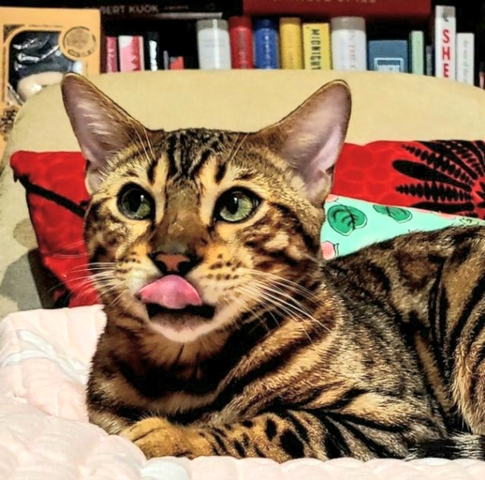 The Bengal is a cat breed created in the early 60’s from hybrids of domestic cats: the Asian Leopard Cat and the Egyptian Mau. Back-crossing to domestic cats is then done with the goal of creating a pet cat with wild-looking, high-contrast shimmering coat, often referred to as a glitter pelt. The breed was even marketed as “toy leopards.”

A Bengal’s fur is very soft and short. It feels much like a rabbit’s, like polished fur. The individual strands of fur are “ticked,” meaning there are bands of two to three colors on each strand.

Their fur sparkles in sunlight. Because the tips of their hair strands have less pigment, light shining through this translucent part of the hair is what makes it appear to sparkle.

All Bengal hybrids are often prohibited and regulated by country, state, city and township laws.

In the US, in New York City and the state of Hawaii, Bengals are prohibited, as are all other hybrids of domestic and wild cat species. In various other places, such as Seattle, Washington, and Denver, Colorado, there are limits on Bengal ownership. Bengals of the F1-F4 generations are regulated in New York state, Georgia, Massachusetts, Delaware, Connecticut, and Indiana.

In Australia, Bengals are banned outright.

Apart from being so beautiful, Bengals are also smart, energetic and playful. They are ever vigilant and alert. 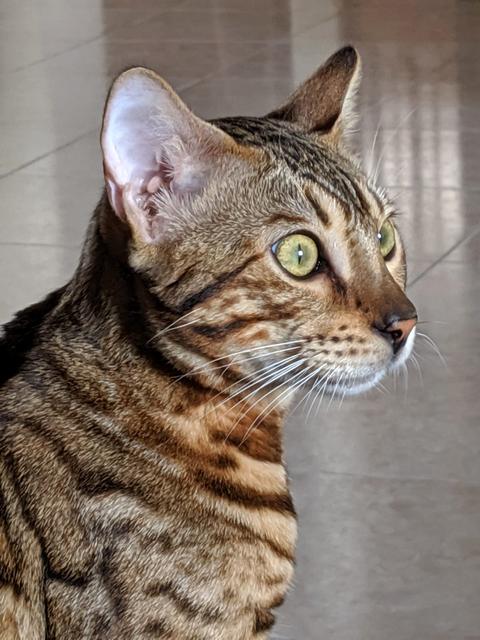 Bengals are active and inquisitive and love to be up high. Freyr delights in looking down at the world perched high up on top of my bookshelves. 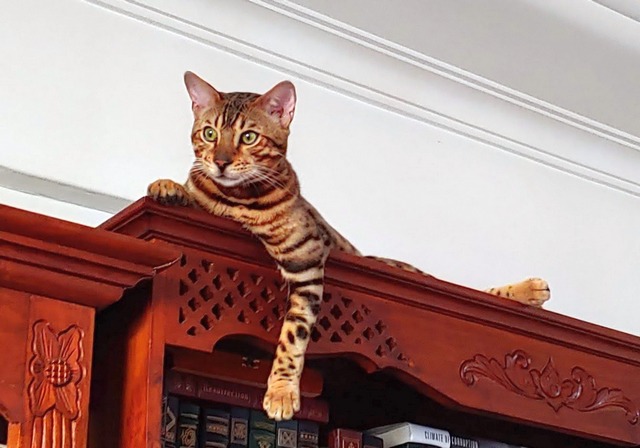 They enjoy playing, chasing, leaping and exploring. In general, Bengals are action-oriented. They are athletic, confident and curious. Unlike many other breeds of cats, Bengals really make their presence felt.

Freyr is king because his arrival meant we have had to invest a bit of time and effort to cat-proof our house. We also had to ensure that he stays safe and doesn’t jump out of the window. (We don’t want him ending up as a lifeless splat ten floors down.) The decision to adopt Freyr meant that as a family, we made a definite and deliberate long-term commitment to make sure that he is now our pet and is fed and taken care of on a daily basis. That includes clearing his litter box, which is not exactly a pleasant task, to be honest, but it is a daily chore my younger son – the pet parent of Freyr – has commendably taken ownership of, and which my older boy has also begun to participate in. And because Freyr really craves human interaction, his attempts to hug us often result in pain being inflicted as he has rather sharp teeth and claws.

All said, Freyr is a delight, sharp teeth and claws notwithstanding. 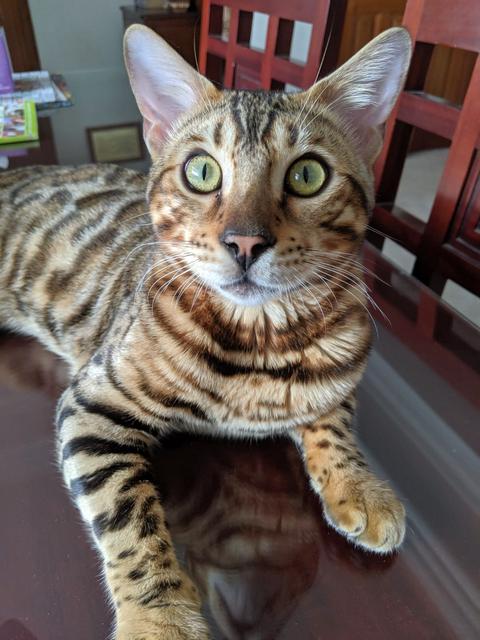 When he senses that I am going upstairs, Freyr will race ahead and park himself at the door of my room, pleading to be admitted. It breaks my heart when he yowls like a baby for attention. When he intuits that I intend to go downstairs, Freyr will again tear ahead of me and literally speeds down the staircase in such a manner that I often worry that I will step on him accidentally.

One night, without my knowledge, he was inadvertently let into my bedroom, and his playfulness soon resulted in his grabbing my legs (sharp claws!) and almost sinking his teeth into my toes. I woke up with a painful shock.

Today, our house is often filled with sounds of my wife and elder son yelping and squealing away as they try to fend off an overly affectionate Freyr. The first time I heard a loud shriek from my son, I thought he had stepped on a thumbtack or a kettle of boiling water had toppled over his head.

Yes, Freyr’s teeth and claws can cause that kind of reaction!

That’s what comes with a cat that loves interacting with humans.

Still, it’s hard to be angry with a helpless, charming and adorable little kitten, who’s actually quite big for his age.

Besides, Freyr’s purring is the most comforting and therapeutic sound in the world. 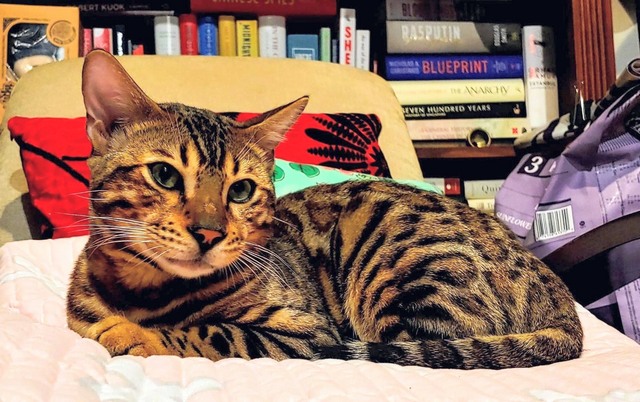 To me, that alone more than make up for any inconveniences.

Freyr’s presence in our lives is also a timely reminder – at least for me – that I need to be better at anger management.

It’s so easy to love whoever’s easy to love but to love someone who can be difficult is very challenging and is a character-building endeavor.

One morning I heard a crash downstairs, and when I rushed down I found that Freyr had turned his drinking fountain upside down. Water was all over the floor and I slipped thrice trying to wipe the floor dry.

I got the wet floor taken care of, cleaned the drinking fountain and left it to dry and filled a drinking bowl with fresh water for Freyr and returned to my room.

Then I heard another crash. Freyr had over-turned that water bowl as well.

I rushed downstairs to clean up, and again I slipped, this time hurting my left knee quite badly.

At that time, I developed a sudden craving for cat meat curry.

It sure took a lot of restraint for me not to kick the life out of him!

But homicidal ideas soon disappeared when I thought of how sweet he can be at times.

“Until one has loved an animal, a part of one’s soul remains unawakened.” – Anatole France 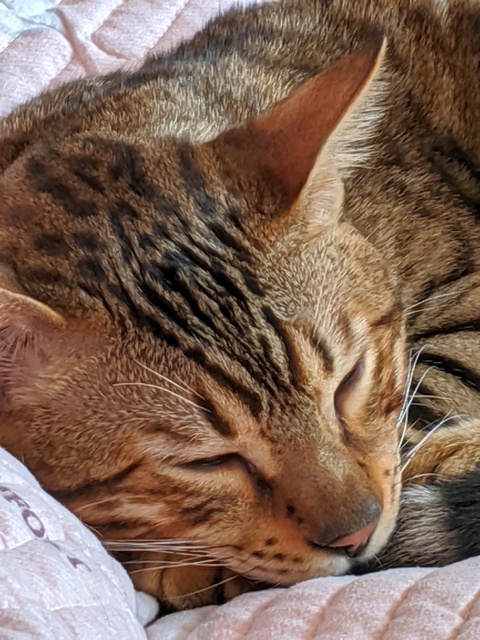