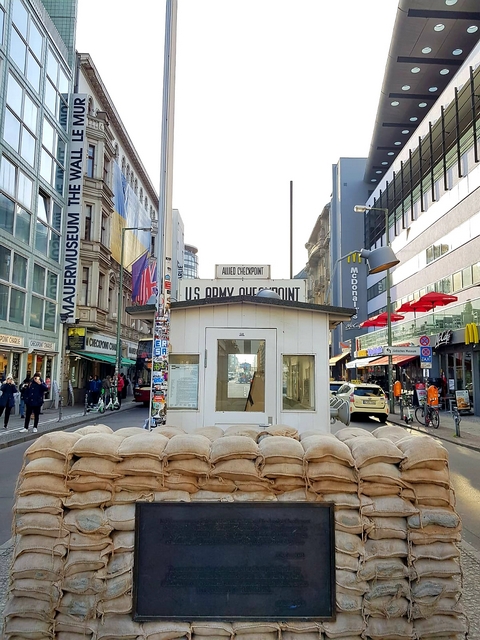 The plaque says: “In memory of the tank confrontation at Checkpoint Charlie from October 27, 1961 and in gratitude to the Berlin representative of the US President John F Kennedy, Lt General Lucius D Clay, for his determined action in defending Berlin’s freedom.”

The name Charlie reminds me of a scumbag I know and the coincidence that one of the most abhorred Cold War sites was the American-controlled crossing point in Berlin called Checkpoint Charlie is not lost on me. Here US troops and their East German counterparts surveilled each other – eyeball to eyeball, toenail to toenail – for decades, supported by tanks and all kinds of firepower.

A replica of the guardhouse remains.

There are also lots of souvenir shops nearby selling escape memorabilia and bits and pieces of the Berlin Wall. (Cheapskate Charlie would have approved.) There’s also a museum nearby and of course, like most museums everywhere, it ultimately leads to a gift shop.

Home in Singapore, Checkpoint Charlie tchotchkes – fridge magnet, a mug and a tiny fragment of the wall – laid out on the February 5th international edition of The New York Times.