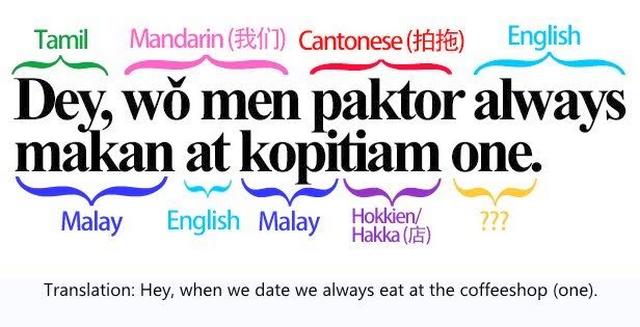 Came across this the other day; no idea who wrote it, but I think it’s brilliant; here’s my edited version:

Questioner: You look Chinese.
Singaporean: I am a Singaporean.

Q: But you look Chinese.
S: I am a Singaporean Chinese.

Q: But you are a Chinese.
S: I am a Singaporean Chinese, not Chinese from China.

Q: So, you are not a Chinese?
S: I am not Chinese from China.

Q: But your great grandfather is from China?
S: Yes, but I was born in Singapore, so I am a Singaporean Chinese.

Q: Why not?
S: Because for over 30 years, our country had a Speak Mandarin campaign that was so successful that the new generation practically don’t really know how to speak dialect anymore.

Q: So, you should speak very fluent Mandarin since the campaign was so successful?
S: No. That campaign was effective before, but not anymore.

Q: Why?
S: Because most people speak English nowadays. We have a Speak Good English Movement.

Q: So, English is your National Language?
S: No!

Q: So, what is the National Language of Singapore then?
S: Malay.

Q: Then why is your National Language Malay?
S: That’s another long history lesson.

Q: So, your National Language is Malay and nobody speaks it?
S: The Malays speak Malay. That’s their mother tongue.

Q: So, your mother tongue is Chinese?
S: Yes.

Q: Do the Malays and Indians speak their mother tongues fluently?
S: More fluent than the Chinese speaking Chinese, I think.

Q: Why?
S: Because that’s their mother tongues lah!

Q: Then why can’t the Chinese speak Chinese?
S: Because English is spoken everywhere and is the main language of instruction in our schools.

Q: I last heard that Singapore has a bilingual policy.
S: Yes, we have; we do learn mother tongue in school.

Q: Why?
S: Because our country’s working language is mainly English, there is not much places to use the Chinese language, perhaps only with our grandparents and when we buy things in the market.

Q: Then how is that bilingual?
S: Search me.

Q: So, you are a Singaporean Chinese who can’t speak your National Language, and cannot speak your mother tongue fluently and can only communicate in English with a strange accent.
S: What’s wrong with my accent?

Q: I don’t know, it is just weird.
S: Does it sound British or American?

Q: Neither, I thought you should sound British since you have been colonized before.
S: No, that was long long time ago, dude, though some of those scumbags still refuse to leave.

Q: How come you try to sound American?
S: Maybe because I watch a lot of Hollywood movies?

Q: So, what are you really?
S: I am a Singaporean lah!

Q: What the fuck!