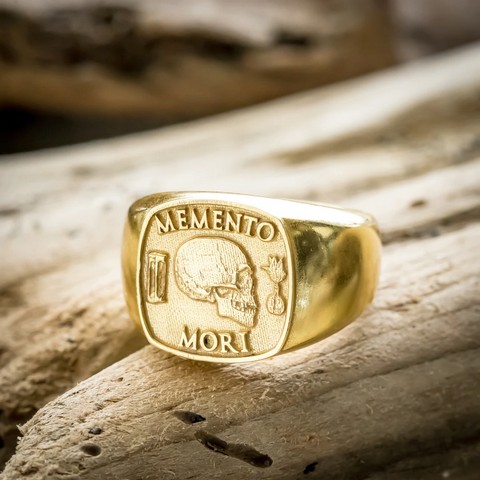 My ring is inspired by the French painter Philippe de Champaign famous painting “Still Life with a Skull,” which showed the three essentials of existence – the tulip (life), the skull (death), and the hourglass (time).

Singapore was booted out of Malaysia on August 9th 1965.

On that day, towards the end of a press conference after Singapore became independent, Lee Kuan Yew said: “There is nothing to be worried about. Many things will go on just as usual. But be firm, be calm. We are going to have a multiracial nation in Singapore. We will set the example. This is not a Malay nation, this is not a Chinese nation, this is not an Indian nation. Everybody will have his place: equal; language, culture, religion.”

In a subsequent television broadcast, Lee Kuan Yew stated: “I have a few million people’s lives to account for. Singapore will survive.”

And survived we did!

From March 18th to March 31st, in locking down the country to contain COVID-19, Malaysia prohibits all Malaysians from leaving the country. Those who return from overseas will have to go through health checks and go on a 14-day self-quarantine.

The 415,000 Malaysians who commute to Singapore to work on a daily basis are in deep shit.

And some Singaporeans worry about our food supply, most of which are trucked into Singapore from Malaysia daily. Panic buying soon started. This despite assurances by Trade and Industry Minister Napoleon Chan Sia Suay that we have more than enough food due to our more than adequate stockpiles and alternative sources.

The fact of the matter is that Singaporeans need not be unduly worried.

Stoics believe in memento mori (Latin “remember that you must die”) a reminder of the inevitability of death. The moment we were born, a death sentence is passed on us and no one can escape death. The signet ring I wear carries the word “Memento Mori” reminding me that I must not waste a moment to be a positive influence while I am alive. Engraved on the inside of the ring are the words “You could leave life right now” leaving me, the wearer, to repeat to myself the final half of Marcus Aurelius’s timeless words: “…let that determine what you do and say and think.”

In other words, stoics believe we must live NOW, while there is still time.

And that’s how Singapore’s leaders have prepared us for, since that fateful day in August 1965.

In the next few weeks, it’s going to appear as if our planet is ending and life as we know it will be gone. In fact, it already seems so, what with people dying by the thousands, the whole world shutting down, countries closing their borders, etc.

But truth be told, if there’s one country that has been preparing for disaster, it’s Singapore.

When a nation is born from ashes, reliant on the country that just kicked you out for even food and water, you steel yourself for the world to end from day one.

Most of all, we’ve been stockpiling money.

The entire size of Singapore’s total reserves is a state secret, but estimates by most analysts put it at well above S$500 billion (US$370 billion).

Well, when your country is founded on the premise that it won’t survive (and even Malaysia thought so), you have to live every day as if there isn’t going to be a tomorrow.

In an emergency, you see teams everywhere on the island springing into action almost immediately.

We’ve learned from SARS and we’ve learned from H1N1 and our medical facilities are not just world class. WHO refers to our handling of COVID-19 as “gold class.” We have 5.7 million people, but we have the capacity to test more than 2,000 people a day for COVID-19!

Our supermarket shelves re-stock overnight. We don’t see people fighting over toilet paper and you don’t see hordes of frightened people rushing to join mile-long queues like those seen in videos being shared widely yesterday of such behavior in the US.

Dormitories and other accommodation are immediately being prepared for Malaysian workers who are stuck, screwed by their own government – and it’s been just over 12 hours since our ever-friendly neighbors dropped the bombshell on us.

And if worse comes to worse, if it’s every country for itself, we have ammunition stockpiled. In addition, our fighter jets are able to fly back to defend us within minutes. Each male citizen is an armed forces reservist and we are on standby and ready to defend our nation, at a moment’s notice, against any retard foolhardy enough to consider taking advantage of this worldwide crisis.

Did this happen overnight? No, we’ve been prepared since August 10th 1965.

Indeed, these are plans laid out carefully over 55 years, since August 10th 1965, when our leaders’ mindset was that there might not going to be a tomorrow. Remember how Lee Kuan Yew cried on TV on that fateful day?

Memento mori, remember that you must die, let that determine what you do and say and think.

We are prepared, so chin up Singaporeans, we have survived and we will survive this.