Stupid is As Stupid Does 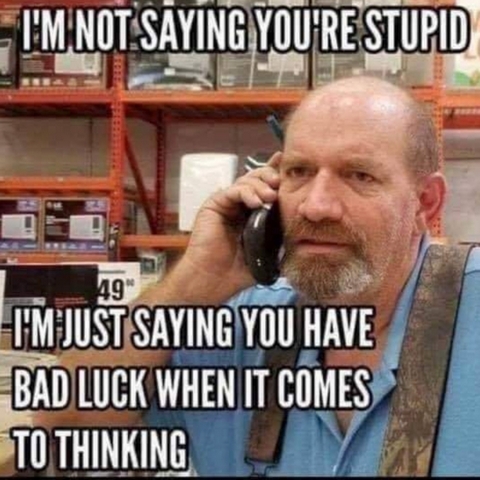 An acquaintance likes to brag that he has high IQ and qualifies for MENSA but unless I see proof, to me, that’s just braggadocio.

(Actually, it’s kinda embarrassing considering he’s not exactly the sharpest tool in the shed, though you wouldn’t know if you’ve just met him for the first time.)

Another person insists that in Malaysia, if you are honored with a certain title bestowed by a sultan, or the king – all buffoons by the way – you are free from persecution. You cannot be charged for any crime.

But unless you show me and let me see with my own eyes that it is a law written into the Malaysian constitution, I cannot accept that as a fact.

This outrageous claim was recently echoed by someone I know who has proven to be a disloyal friend – I place a premium on loyalty, and you can’t straddle two worlds, my friend – and who has lost all credibility with everybody. In fact, he is known as “a bullshit king with zero principles” and people roll their eyes when he shows up.

Then there are a few informers who told me that a new cigar lounge is opening in the Arab Street area where you can buy your cigars downstairs, smoke in the lounge upstairs, even bask in the moonlight on the rooftop.

I had a good laugh! Almost fell off my $3000/- Chesterfield armchair.

And please, all of you irritating bugs, please go smoke there and leave me alone! Let me repeat what I’ve often said: “I am extremely happy to sit alone with a pipe (or cigar) and book.” The key word is the word “alone.”

The fact of the matter is that the Singapore government has long stopped issuing permits for cigar lounges.

And authorities are watching.

Operators of such establishments risked being raided, and fined – like the one in Chinatown, that gets raided and fined all the time (I was told) – and if you are not a citizen, your PR status may be revoked. For infractions of COVID-19 quarantine orders, the government has already rescinded the permanent residency status of at least two foreign morons and sent them back to their own countries. So don’t fuck with the Singapore government!

The problem is people believe in their own bullshit and will argue until the veins in their necks become visible, their faces turn red and the cows come home.

Tip: Before you argue with someone, ask yourself, is that person even mentally mature enough to grasp the concept of different perspectives? Because if not, there is absolutely no point.

If you are born stupid, you can’t do much. Fools can’t realize they are fools: to understand the flaws of your cognition (thinking) you need proficiency in metacognition (thinking about thinking); which is a skill, by definition, fools lack. In other words, being stupid makes you too stupid to realize how stupid you are.

Nature designed a world where there’s a constant proportion of stupid people invariant to intellectual, social, or geographic segmentation. The ratio will be the same among Nobel Prize winners as it will be among a selection of garbage collectors or clowns working for Oracle. Nobody really knows why. It could be that Mother Nature (or God, depending on your theology) wants to put a brake on things, reduce the speed of progress, slow down the growth of your country, prevent the economy from an exponential rise so that it doesn’t overheat. So, stupid retards are constantly being manufactured and are evenly distributed in any corporation, government, university, etc that acts both against their own interest and the collective one.

if you don’t, join others of your ilk and go smoke cigars in Arab Street.