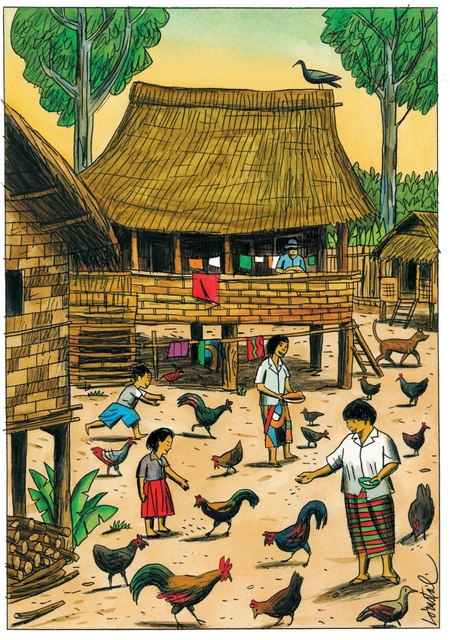 When I was a kid, visiting my grandparents at their kampong (village) home, whenever someone wanted to cook a chicken, all he or she had to do was to grab one running around. Those were free-range chickens – like those depicted in the picture above of a Malay kampong – without any antibiotics or growth hormones injected into them. Their skin was a bit yellowish, their meat not soft and mushy like the chickens you get in supermarkets nowadays, and they are also smaller and leaner, not so fat and their legs are skinnier. Nothing tastes like the goodness of a freshly slaughtered chicken! Being a very well-loved very first grandchild/grandson of the clan, and the eldest son of the eldest son had its privileges; each time I visited, a chicken died.

Today, buying a chicken can be a complicated affair.

First, there’s organic chickens found in some high-end supermarkets and butcheries. They are said to be fed organic-certified feed, fed with probiotics or are free-range and of course drug and hormone-free. Some even have fancy names. They cost a lot as they are chickens for the well-heeled. Maybe they even massage the chickens before cutting their throats? Why? To relax them so that their meat won’t be too tough. Who knows, right? 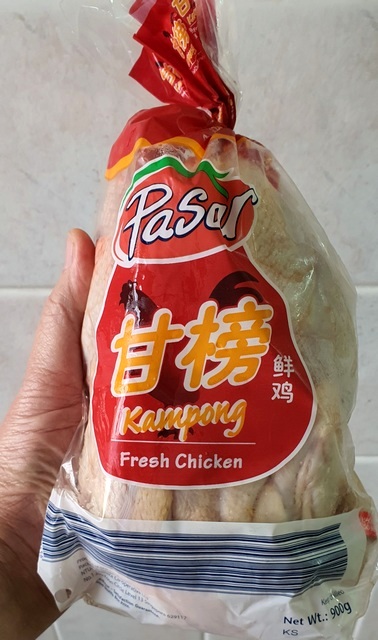 Next, you have the kampong chickens but they are definitely not like those kampong chickens from my grandparents’ kampong. Today, “kampong chicken” is only a name, with some “chicken experts” even claiming that it is the name of a particular breed. I am no “chicken king” nor am I one of those know-it-alls who can’t wait to deliver a lecture on any topic on earth to anyone and everyone, whether or not anyone cares to listen, so I can’t contribute to that field of knowledge, sorry. What I do know is that these chickens are definitely not free-range but are instead raised in rows and rows of cages. Common sense tells us that it is simply not commercially viable for anyone to go around catching free-range chickens in modern-day Singapore (where kampong no longer exists) to sell in the 230 Fairprice supermarkets here.

In a neighboring country, these so-called “kampong chickens” are even dyed yellow with Aniline. Thankfully, Singapore’s Agri-Food & Veterinary Authority makes sure nothing of that shit happens here. Fake kampong chickens, imagine that! What next?

Then, you have the regular chickens. These can be cheap – I remember some supermarkets selling three for 10 bucks at one time! They are as good to eat as any chicken, to be honest. Especially great for curry. And finally, there’s the smaller size Silkie chicken with silky white plumage, and startlingly black skin. Many older Chinese believe that these chickens are more nutritious. Throw one of these into a pot with a generous amount of red Korean ginseng roots and the brew is said to give Pfizer a run for its’ money.

With Singapore government’s strict enforcement of food importation laws, no chicken you eat will kill you. (Hen-pecked husbands are a different matter altogether.)

An elevated set of safe distancing measures, as a circuit breaker to preempt the trend of increasing local transmission of COVID-19 was started on April 7th.  These measures were supposed to end on May 4th  but will now be extended to June 1st. You’ll probably be cooking at home more. So, know your chickens!

But the modern housewife or househusband or amateur cook can find themselves facing a befuddling array of claims about the chickens they see being sold in supermarkets.

The key is: don’t be too chicken to ask questions.

Those who sell chickens should know what they are selling, otherwise their goose is cooked.