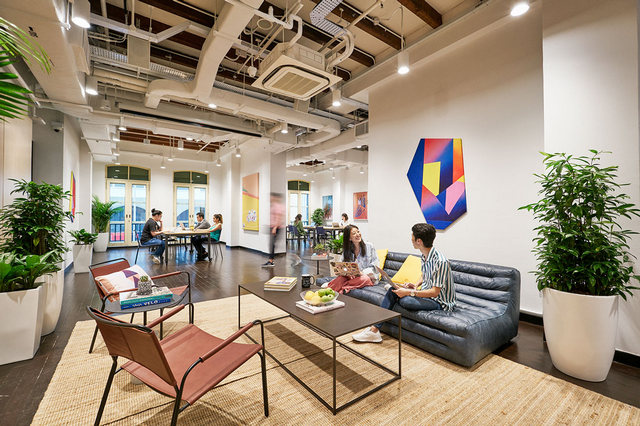 All will be gazillionaires one fine day.

The pandemic has thrown up some interesting stuff, such as people working away from their offices. It has been like that for me for over 35 years. As a traveling consultant, work has always been done at clients’ premises although a nice corner office with my name on the door was reserved for me at head office.

Then when I joined the circus, the globally-integrated technology company that claimed to have invented “telecommuting” (consultantspeak for “working from home”) a colleague and I even sold and implemented a couple of “telecommuting” or “hot desking” projects, making heaps of money for the circus, aka Big Blue.

For me personally, all this was nothing new even long before I joined the circus.

Same thing with shared offices although today people refer to it as “co-working space” like it’s a hip, new thing. Back then, co-working was what you would resort to when you had no money to have an office of your own and all you could afford was to rent a desk and a fancy address to receive mail. For a few dollars more, the receptionist will even answer the phone in your company’s name.

Receptionist: “Good boring, this is the Tan, Tan, Tan, Tan Corporation, can I hep chew?” She then takes a message for you.

Back in the mid 70’s I started several entrepreneurial ventures while holding on to regular day jobs. The first time I used a shared office was one operated by an Australian woman out of Fook Hai Building. She expanded – I mean her business expanded – and we then moved to Shaw Towers.

The desk behind me at that time was occupied by a douche from the UK who would yell at the top of his voice. (Yup, it’s always a douche from the UK who pissed the shit out of me.) I couldn’t stand the yelling and my eardrums were going to burst, so I moved to an office at The Plaza. A local woman married to some white guy was the tenant and rented me a desk. That didn’t last long as the woman was clearly psychotic and the husband was a frigging loser. Plus they had their crying babies in the office with them, a fact not disclosed to me prior to my agreeing to rent a table from them. Fucking retards!

So I moved again, this time to a shared office at Odeon Towers.

See, I’m not new to what is now fancifully referred to as co-working space.

This concept has been around a long time, but nowadays, people give it a new spin and it all suddenly looks so “cool” and trendy.

Back then, if all you could afford was to rent a desk, it was something that was almost shameful and something you wouldn’t brag about. Today, people make everything sound so sexy and glam when they have to pay to sit around in a common space, banging away at their laptops in the presence of strangers.

Well, back then, you would hide the fact that you and your girlfriend took vacations together before you married her, today, you would put photos from those trips on a video you would proudly show at your wedding reception.

Well, back then, a baby born out of wedlock would be called a bastard, today a child born to parents who are not married is referred to as a “love child.”

Tell me the world’s not gone topsy-turvy.

One other interesting nugget that the pandemic throws up is the popularity of video-conferencing.

35 years ago, I carried a portable email device and an acoustic coupler just to check emails on the go. There was no push notification and checking emails was a royal pain in the butt. You need to fit the coupler onto a phone – there were no smartphones then, and cellular phones were just emerging – pray for a signal, then hook the portable email device to the whole setup and hope your emails get transmitted without being cut off halfway, in which case, you repeat the process all over again. Phew!

It took decades before Skype became popular, and then WhatsApp video calls came into being and today, going on Google Hangouts and Zoom and a whole bunch of similar shit are common everyday things people do.

So, been there, done that, grown out of the t-shirt and now happily sniggering at noobs with a smirk on my face and a hundred-dollar cigar – a gift from a friend – in my hand, and wondering how to make some money by predicting the next trend.

“When an old man dies, a library burns to the ground.” – African proverb

Some kids wonder what the hell is this old fart saying, what is he trying to prove? That he is a smart ass because he has seen it all before?

I am not trying to prove anything. All I’m saying is that even people of my generation, as well as those who existed way before, already knew how to harness technology for the betterment of our personal and economic lives, and we continue to make it better.

Boomers paved the way for zoomers.