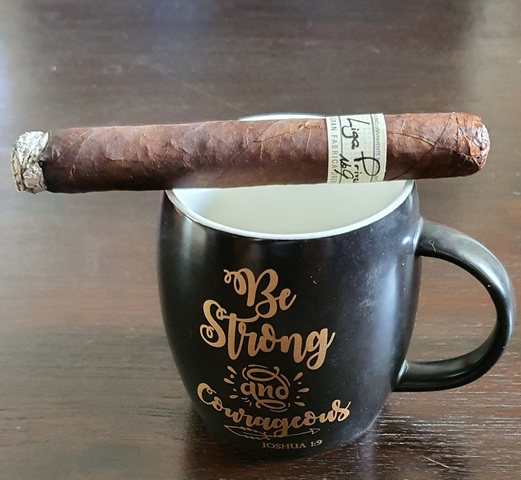 They claimed that this cigar was originally crafted not for resale, but for their own personal humidors.

Seven different tobaccos from seven distinct vegas are included. Wrapper is hand fermented for more than 18 months. Cigars are aged a full year before offered for sale.

It is a common trope in cigar reviews to assert that non-Cuban cigars are harsh and take getting used to, but the No. 9 is quite flawless in both flavor and character. Rich, complex, strong, powerful and full-bodied – and without being harsh – it is lush, earthy and espresso-like with incredibly dense body.

It is certainly an unparalleled smoking experience for those who enjoy strong cigars.

The Biblical verse (Joshua 1:9) on the cup is very appropriate.

This is another non-Cuban cigar I enjoy tremendously but because it is strong, it can be too much for some people. The nicotine hit can pack a wallop. A friend of mine smoked one, and puked after that. So never smoke one first thing in the morning, or on an empty stomach, and never smoke one in a hurry. This is a cigar to be slowly savored when you can set aside time for it.

One other thing: if you notice that the cigar produces lots of smoke when it is lit, that’s because of – according to an “industry insider” – the oil they apply on it to give it an oily look.

Ashes to ashes, dust to dust, if smoking doesn’t kill you, oil probably must!