Not Just for Presbyterians 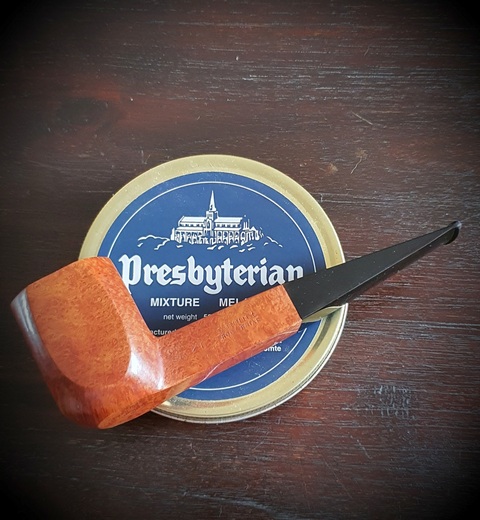 My panel-shape Dunhill ODA Root Briar and a tin of Presbyterian Mixture.

This fine tobacco originally had no name. It was blended by Alfred Gale, before the first World War especially for the Very Rev Dr John White, an influential clergyman in Scotland, who served as Moderator of the General Assembly of the Church of Scotland. White introduced it to Stanley Baldwin, later Earl Baldwin, Prime Minister of UK in 1923, 1924 and 1935. Baldwin liked it so much that regular supplies were sent down to him and it was he who suggested that it be called “Presbyterian Mixture.” The trademark was first registered in 1925, during Baldwin’s second term as prime minister.

The brand later ended up as one of those under Planta Tabak-Manufaktur of Germany, a firm founded by Dr Manfred Obermann in 1956.

But after 63 years and three generations of successful ownership, the family-owned company stopped producing tobacco in Berlin on 31st August 2019. Mac Baren of Denmark acquired the company and now makes all of Planta’s products.

I am of the view that John Calvin’s theology about predestination – a belief of the Presbyterians – is a crock of crap and there is no reason for Presbyterians – like an acquaintance of mine – to be smug and cocky as hell. However, I still think the tobacco named Presbyterian Mixture isn’t too bad. Anyway it’s only a name and has nothing to do with religion.