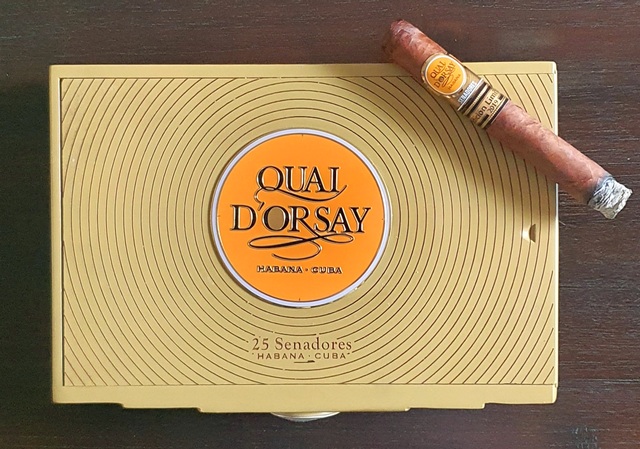 In 1976, then French president Valéry Giscard D’Estaing wanted a cigar that France can call its own, so SEITA, (Société d’Exploitation Industrielle des Tabacs et des Allumettes), the state-owned tobacco distribution company (since privatized) attempted to make one, but soon turned to Cuba for help.

It was the first time ever that the Cubans created a brand on request from a country.

Since then, the Quai d’Orsay cigars have undergone several iterations.

At one time there was only one size, then came a new fancy band and the release of a regional edition in 2011 in the form of the Robusto Embajador. Subsequent regional releases included the Superiores, Belicoso Royale and Robusto Diplomatico.

During the Festival del Habano 2019, new Limited Editions for 2019 were announced, among them the Quai d’Orsay Senadores. It happened to be Quai d’Orsay’s 45th anniversary.

The vitola is quite unique. It is a Grand Corona which only a few brands like Bolivar (Emperador), Saint Luis Rey (Serie B) have released.

This limited edition comes in a real fancy sliding box and is medium bodied, delivering a woody and nutty subtle aroma with a perfect draw.

The day after tomorrow, June 19th, is Phase 2 of Singapore’s reopening and a great time to celebrate by buying another box of this from my favorite cigar retailer.