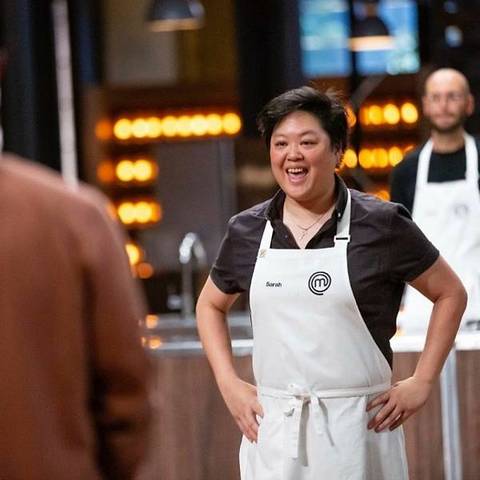 Not exactly fothing in apoplectic fury.

Toxic people are the bane of my existence. I’m slowly eliminating them from my life. Yes, some scumbags are going to find themselves off my invite list from now on. Over the weekend, I just “promoted” a few assholes to my “persona non grata” list. The scary thing is that some of these retards probably drive, vote, and may have already reproduced! When I say “toxic people” I’m referring to those who are rude to their parents and their elders, those who sow discord, and also those who think they must be trendy and jump into the political correctness bandwagon, amongst others. MasterChef Australia contestant Sarah Tiong comes to mind. She’s one of those who cry racism without even knowing what racism really is. She recently criticized Australian radio station Triple M for a “tone deaf” incident which she said was racist.

She revealed on Instagram that she was greeted by one of the presenters with a “ni hao ma” – something she felt “uncomfortable and shocked” with. The Australia-born wannebe chef abruptly ended the call. “This is racism. What an insensitive, tone deaf thing to say,” wrote Tiong, whose mother is Malaysian.

Tiong later elaborated on it, revealing that the presenter also tried to confirm if it should have been “lei ho ma.” She said: “The mere presumption that I speak or want to speak Mandarin or Cantonese with you, followed by the flippant dismissal of distinguishing the two different languages is racist. It is dehumanizing.”

I’ll let you form your own opinions about this incident, but here are my two cents’ worth: If I say “G’day mate” to an Aussie, am I being racist? If I say “Kia Ora” or perform the Hongi in New Zealand, am I being racist? If I wish Indian friends with a Namaste, or Thai friends with a Wai, am I being racist? If I bow to a Japanese, am I being racist? I would be delighted if a non-Chinese offers me a greeting in Chinese when he meets me. I would appreciate his taking the effort to create affinity and to break the ice. My parents taught me never to pretend to be somebody that I’m not. The worst retards are those who deny their own ethnicity. I have lived and worked internationally but I make sure I don’t adopt a phony accent. If I had greeted you in a mocking and overly-exaggerated, clownish manner, then perhaps you can call me racist, but if a greeting is offered in good faith, in civility and in the name of good manners, cordiality and collegiality, and you get insulted, then I’m not the one with the problem, you dungu!