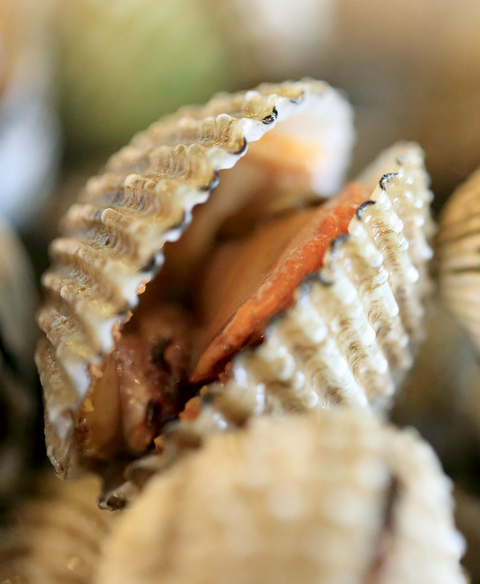 Long before the world has heard of Jamus Lim, cockles have already made their appearance on this blog, on May 15th this year, to be precise.

But now that cockles are on everyone’s consciousness and lips; the sands have shifted.

I’ve just learned that SIHUM (Singapore Institute of Humanitarian & Universal Movements) has shelled out millions to launch a campaign in the interests of cockles.

Prof Busuk was speaking at the launch of the Adopt a Cockle campaign the other day at Jurong Fishery. The initiative is a drive to encourage everyone residing in Singapore to each adopt a cockle as pet.

“The word ‘cockle’ is now being overly-used,” said the professor, “to understand what it really means and to get further acquainted with this shellfish, I encourage each citizen and permanent resident of Singapore to adopt a personal cockle.”

Prof Busuk said that because cockles are low-maintenance (“easier to manage than a girlfriend, or a mistress” he quipped) they make perfect pets and feeding is not a problem. “Each cockle is self-contained, so to speak, in fact, it sustains itself, you don’t need a litter box and you don’t have to go around collecting its poop, because it is like a mini mobile-toilet, plus, if you are tired of it, you can just pop it in your mouth and eat it; you can’t do that with your pet dog or cat,” he said.

The professor also added that there are more than enough cockles to go around – “more than 10 million population at the moment” – and supplies of cockles for char kway teow or laksa will not be jeopardized. He was obviously referring to the findings of cockle population and cockle housing subject matter experts Mr Liu Da Han and Dr Lao Chin Kwa.

In the meantime, SIHUM’s publicity is breaking the hearts of the brains behind DOUCHE (Database Of Universities Committed to Heart Education) whose chairperson, Emeritus Professor Kek Sim, insists that because heart surgeons are more committed to making money (by performing surgeries) than in lecturing at universities, SIHUM’s future is in jeopardy.

“But that’s not a major issue,” Prof Kek fumed, “what is more at stake is that nowadays when people see the word ‘cockle’ they think of the shellfish, and not the cockles of our hearts. Then they rush out to eat these cockles which put them – the people lah, not the cockles –  at risk of hepatitis infection. Moreover, these cockles in our cholesterol-loaded lard-infused char kway teow and obesity-inducing coconut-milk-osmosized laksa will kill us, not the cockles of our hearts. For our health’s sake, it’s vital that we know the critical difference. Our heart surgeons – they’ve actually seen these cockles up close – should educate the public by lecturing and teaching instead of always being so busy engorging the size of their retirement funds by operating on wealthy patients.”

BREAKING NEWS: Oh, by the way, this morning, CNA (Controlled News Asia) reported that the first pet cockle funeral on record in Singapore, was just held late yesterday afternoon at Singapore Gasket. (The officiating minister was the Rev Father Pedo Phile.) The pet cockle belonged to a youngish female Singapore permanent resident, who declined to give her full name. With tears streaming down her cheeks, the foreign talent (whose LinkedIn profile, based on a search of her surname, listed her occupation as “full-time sovereign”) was overheard, in between sniffs and sobs, pouring her heart out, telling those present how grieved she was at the unexplained premature demise of her pet cockle.

“I’m truly and totally devastated, this is a total tragedy and I’m beyond sad, totally,” she was quoted saying, “but seeing my oh-so-cute little darling cockle lying in her pretty little pink coffin, as if she was sleeping peacefully with a happy open-mouthed grin on her face, totally gave me a great sense of peace.”

She added: “And with so many of my friends and loved ones, and even total strangers, turning up for this epic funeral, it totally really warmed, what else, the cockles of my heart lah. Totally.”