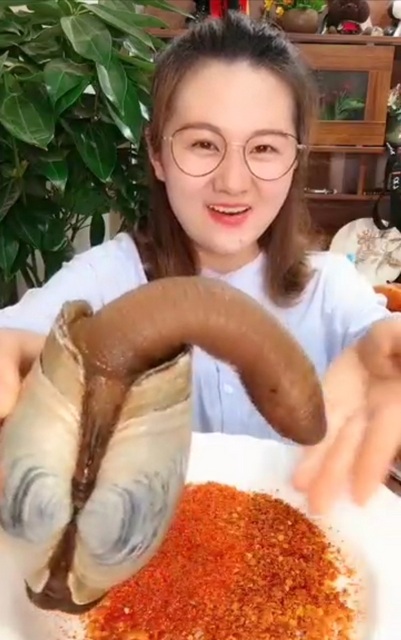 Anything to get into the limelight.

They are mostly women.

Although men are guilty of it too.

Or they would hold up a giant live lobster, rip off its head, dip a huge chunk of lobster flesh into some sauce and stuff their face with it – “lobster sashimi.” Yes, and all the time almost gagging while talking. Meantime, parts of the lobster are waving about frantically in its death throes.

Or they would race against time to polish off a humongous plate of noodle and yes, all the time almost puking and giving a live commentary on how appetizing the taste is.

These are livestreamers from China who proliferate social media. They are on lots of TikTok videos.

Not only are they disgusting, they are actually extremely shameless, revolting, gross, and indicate that these retards exhibit possession of totally zero class of any kind.

I wonder what is so great about stuffing your face with delicacies and videoing it for the whole world to gawk at? To prove that you are wealthy? That you can afford such rare and expensive food? Giant lobsters and geoduck clams impress the hell out of people? Attention-craving narcissists are a pathetic lot, really. Next, they will be Photoshopping themselves sucking Obama’s dick!

So I am so glad to know that now, Chinese regulators are calling out these vomitous livestreamers who binge-eat for promoting excessive consumption.

Regulators are acting now because China’s emperor, Xi Jinping has declared war on the “shocking and distressing” squandering of food, and all the ass-kissers from the emperor downwards are racing to respond.

Xi’s “clean plate” campaign is long overdue. He banned the use of public funds for banquets and such back in 2012, but rich private citizens continue to live like degenerates.

In a culture where “Have you eaten till you are full?” is a greeting, custom dictates that ordering lots and lots of pricey dishes and leaving food behind are ways to demonstrate generosity and respect toward one’s relatives, clients, business partners and important guests.

It has gotten very much worse now that China is no longer a country where people eat tree roots or rats to survive. Opulence and lavishness are now the norm. Just like mixing Louis XIII with 7UP is the norm.

Indeed, when my wife and I were in Shanghai couple of years ago, one evening, we were dining at a restaurant when we noticed that at the table next to ours, which was occupied by only three persons (one host trying to impress two potential clients?) ordering enough food for at least 15 people and then all three tasting and nibbling before leaving the restaurant. My wife had to physically restrain me because I almost wanted to go over to the table and grab some dishes over. I mean, they hardly touched the food! There was a whole suckling pig, a huge very delicious-looking steamed carp, an entire plate of expensive abalone, a gigantic lobster, and of course, a whole geoduck clam (a must!) – all barely eaten.

Such habits have contributed to an estimated 17 million to 18 million tons of food being discarded annually, an amount that could feed 30 million to 50 million people for a year, according to a study by the Chinese Academy of Science and the World Wildlife Fund.

Emperor Xi’s call is “as much a warning against the dangers of profligacy as it is a reflection of the generational shift in values that has emerged as living standards have risen,” preached a recent writeup I came across recently.

For once, I salute Emperor Xi! 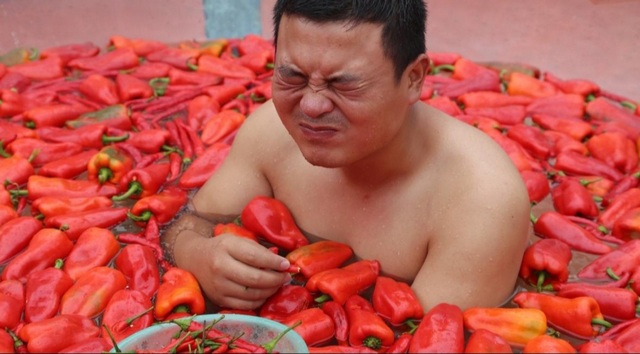 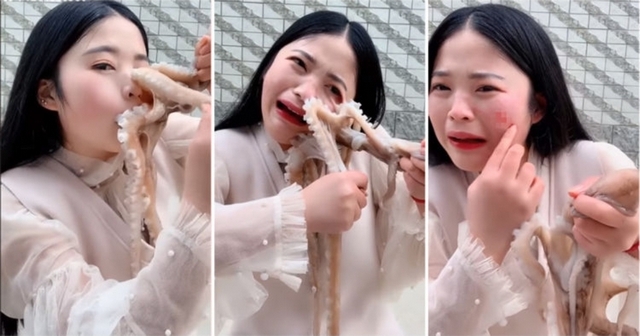 Dumb bitch got what she deserved.