Now Everyone Is An Author 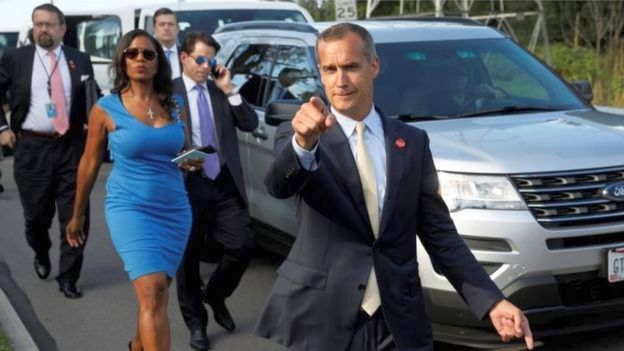 Three of the people in this picture wrote books about Trump – Newman (in the blue dress), Scaramucci (on the phone) and Lewandowski (pointing).

My ex-colleague proudly announced to me that the latest anti-Trump book he ordered has just arrived.

A new book about Trump seems to crop up each week.

Retards like Omarosa Manigault Newman, Anthony Scaramucci, Corey Lewandowski, John Bolton, James Comey, Andrew McCabe, Michael Cohen, Bob Woodward, kept what they knew close to their chests only to be “revealed” in their books, at the right time.

Other than Woodward, (yeah, yeah, he’s famous, Pulitzer and all) who’s a special kind of a douche – Trump allowed him to tape 18 interviews, and Woodward threw him under the bus (talk about lack of journalistic integrity, skirting of ethics and absence of professionalism!) – most of these “authors” (they probably use ghostwriters) once held sensitive positions in government.

Why didn’t they raise the alarm when their president was allegedly endangering the nation and the American people and the rest of the world?

Then at the “right’ time, they churn out books about what a scumbag Trump was or supposedly, still is.

All for what? Fame and loyalty?

Writing to expose their scumbag president?

I think the discerning among us know who the real scumbags are in this case.

This much I know for sure: all those who write crap about Trump are secretly and madly in love with him.

Simple! He is the golden goose that keeps laying eggs!

The funny thing is, Singaporeans are lapping their books up.

Well, I guess if you don’t have balls to write the truths about our government leaders, it’s entertaining to read books written by those who think they have balls.

My friends know that as much as I respect certain aspects of Lee Kuan Yew, there isn’t a single book in my thousand-volume (at least) library that is about him.

Most are hagiographies written by ball-carriers.

I may respect, but I don’t worship.

It’s hard enough to get me to respect anyone, let alone worship.