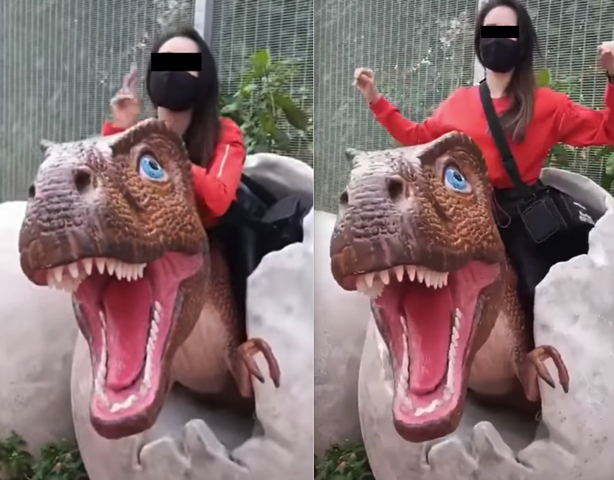 The Jurassic Mile officially opened in October and is a part of the 3.5km Changi Airport Connector which links the heartlands to Changi Airport. Transport Minister Ong Ye Kung, who cycled along the route, posted about the event the day it opened: “Spot life-sized dinosaurs towering above, I counted more than 20 of them,” he said. “They are very playfully exhibited. You should see it for yourself.”

He added that the exhibit was a “labor of love” by the Changi Airport Group. “The airport is down, but the spirit roars!”

Then a retard sat on one of the dinosaurs, rocked vigorously on it for a TikTok video and damaged it, severing it from its foundation.

Later, the dinosaur’s teeth were found missing as well.

I’m at a loss for words.

Whoever posted those photos above, placed a black band over the retard’s eyes, I suppose to hide her identity.

Who this uncivilized creature is should be exposed for all to see.

And you know what the “best” part is?

Bitch probably lives in a condo, shops at Louis Vuitton, drives a BM, eats at fine dining establishments and go for skiing vacations in Hokkaido.

You can take an Ah Huay out of the gutter, but you cannot take the gutter out of an Ah Huay.

And you know what the scariest part is?

Retards like that walk among us, they breed, and they vote.

Retards would even steal from the poor.

The police have arrested about 55 retards believed to have stolen grocery vouchers issued by the Government to less well-off Singaporeans as part of Budget 2020.

The culprits broke into letter boxes to steal those vouchers.

Anyone found guilty of theft could be jailed up to three years or fined, or both.

That’s insufficient punishment for stealing from the needy, if you ask me.

I say “Rotan those retards!” 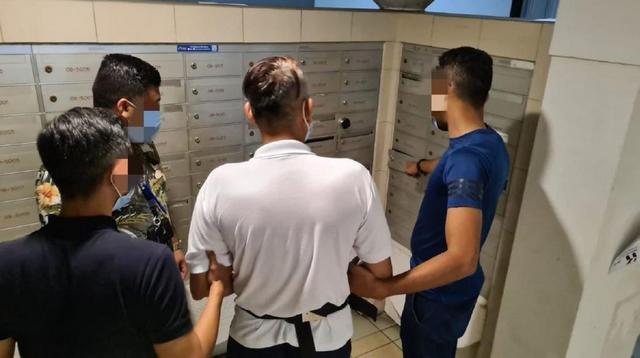 A retard is escorted by police detectives to the crime scene, to identify the letterboxes from which he stole the grocery vouchers.