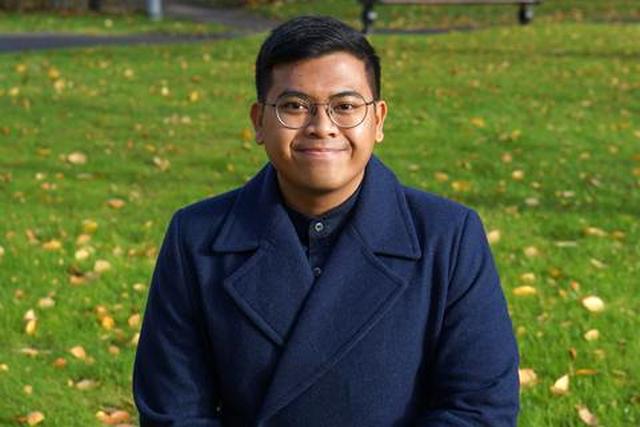 Splurging at Christmas? Spending a couple thousand bucks on a staycation? Pigging out at a Michelin-starred restaurant? Talking incessantly about buying fancy watches or another yacht or re-doing your house? Boasting about the number of bottles of rare whisky you’ve just drank? Bragging about lavish family feasts? Showing off your shopping? A-5 grade Kobe beef airflown in from Japan? Truffles at 500 bucks for 50gms? (“Oh but it was on offer, cheap!”) Meantime, others around you have lost their jobs and are struggling to pay their mortgages and subsisting on cup noodles…

The level of your morality can be judged by how you treat those who are poor.

Last month, I came across this article in TODAY, a brilliant, timely article by Zulhaqem Zulkifli (that’s his picture above) that is worth reproducing in full:

The common eye sees only the outside of things, and judges by that, but the seeing eye pierces through and reads the heart and the soul, finding there capacities which the outside didn’t indicate or promise, and which the other kind of eye couldn’t detect. — Mark Twain

Inequity and social mobility have been hot topics of national discussion in recent years, and it is clear that the realities of those living in poverty are removed from idealized visions of a first-world utopia some of us hold.

Mark Twain talks about the “seeing eyes”, a sight that is able to read “the heart and the soul.” In this essay, I want to focus on how we can foster compassion by adopting Twain’s formulation of sight-as-interaction.

In particular, I wish to discuss a subtle variety of compassion in interactions with those who are less well-off.

Through this act of “seeing” I hope that we can cultivate an understanding of the underprivileged “other.” To me, this is integral to not just the cultivation of a more compassionate society, but to the notion of seeing how we relate with one another with clarity.

Sometimes, we may find ourselves in a group with others who may not share the same level of privilege. You might unintentionally slide into a discussion about a luxury which others do not have the chance to enjoy.

Perhaps it’s the trip you had or some delicious food at that new cafe in town. It could also be complaints — how your salary is not enough for you to get that handbag, or how your parents should be increasing your allowance.

The lack of access to these experiences due to their unaffordability can exclude someone from the conversation itself.

And these are not necessarily limited to material pleasures. It could be having parents who are still married to one another, or family members who care for you, or a place to return to at the end of a long and difficult day.

We should always be mindful that others may not come from the same background as ourselves.

This may seem like common sense, but common sense may not be so common when we fall into the habits of the everyday cultures in which we find ourselves.

This cannot be an excuse to be complacent or to dismiss it. Rather, we can cultivate this awareness, which will only grow in strength.

If you realized you have entered a conversation that is not inclusive, what can you do to rectify the situation?

Change the topic. Change it to something which everyone can participate in. It is not so difficult.

But don’t make the situation awkward, especially for the individual. This might happen if you give others looks or abruptly stop the conversation.

Instead, opt to turn the conversation away and enter a new realm of discussion as naturally as possible — sometimes, the kindest acts of conversations simply begin with “Can we talk about something else?”

Don’t apologize to the individual. This just makes things worse because you indirectly single them out as a “problem.” Ironically, it contributes to a sense of alienation for those individuals.

There is a place for apologies, but this immediate situation is not one of them. Rather, a more gracious thing to do is to apologize personally after the whole thing.

You might also know a person who is not well-off, to whom you would love to give a treat.

This is a nice thing to do. But even in such interactions, there has to be a degree of grace, subtlety and consideration.

Here’s a useful rule I call the Rule of Self-inclusion.

Whenever you want to treat someone to something, be it a nice meal or an activity, include yourself in every aspect of it. What do I mean by this?

I think it is useful to illustrate this by way of treating someone to food (yes, that Singaporean passion).

I was out with a group of friends and amongst us was a particular friend from an underprivileged background whom we wanted to treat to seafood.

We knew that he would decline the treat, mainly because he did not want to feel indebted, but also, to not be made to feel different at the dinner table.

Before we could even spiral into this conundrum, a more perceptive friend of ours started ordering for everyone, asking those present to choose a dish they liked and ordering them in quantities to be shared.

He told the friend who was to be treated that yes, this was a treat for him, but we were sharing it.

Our friend smiled and said that he could do that. Later on, he decided to return the treat and told us that it feels good to be able to give.

There are some things we can learn from this.

Instead of buying specific portions of food, you can order a variety of different food items and share them with everyone.

In this way, you “include” yourself into the treat and shift the attention away from the individual you are treating.

Not only do you avert any feelings of discomfort or indebtedness (“make people feel paiseh”) but you also enrich the experience by sharing and partaking in a meal with them and blur the social lines at the dining table.

As far as possible, do not deny the opportunity for the other party to treat you in return. You may feel that they need the money more, but accepting the treat can actually be the kinder gesture.

When we engage in discussions on poverty, we should not assume to know better than the underprivileged about their circumstances.

We do not presume to tell doctors how to do their jobs. In that vein, we should not prescribe solutions or pass value judgments on those not as fortunate as ourselves, especially if we have not undergone such experiences.

And even if we have, not all poverty is the same; it has different complexities and considerations. Do not cite statistics, figures, numbers, citations, studies, surveys and technical jargon; nobody cares. Doing so trivializes the narratives of the individuals and denies them of their lived experiences.

Figures tell us quantities, but they do not tell us stories.

A better approach is to listen to each individual sincerely. Instead of trying to justify our notions of the nature of poverty, we should instead learn to talk less, and to listen more, to the not well-off.

Only by listening can we cultivate “seeing eyes.” When our ears and hearts are attuned with compassion, we can have a sight that bridges souls.

ABOUT THE AUTHOR: Zulhaqem Zulkifli is currently pursuing his Masters in Buddhist Studies at the University of Oxford. He is a founder of Project Hills, a charitable ground-up initiative that focuses on the provision of essential household items and funds to defray everyday living expenses for the underprivileged and elderly residents in rented public housing flats. This is adapted from a piece that first appeared in The Birthday Book (2020), a collection of 55 essays on the theme “Seeing Clearly.”