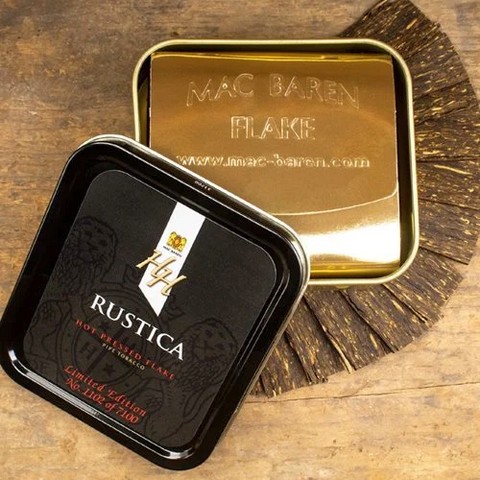 Yesterday, Colonel Dr Michael W Harrison, Honorary Aide-de-Camp to the Governor of the Commonwealth of Kentucky, presented me with a tin of Mac Baren HH Rustica. (“HH” refers to Harald Halberg, who founded the company in 1887. The Rustica was released last year.)

Nicotiana Tabacum is the species of plant that includes all of the tobaccos we’re familiar with – Burleys, Virginias, and Orientals. But there’s another “sister species” – Nicotiana Rustica, which is a species native to the Americas. The English settlers found Rustica tobacco in North America in 1607 and saw the native Indians smoking it in clay pipes.

Since the nicotine content of this plant is unusually high, it wasn’t popular. Today you can only find enthusiasts smoking this in Eastern Europe, and some countries of the Middle East and in some parts of Asia.

Mac Baren used a new process to make this very potent tobacco palatable. The tobacco leaves are sun-dried and thus retain their natural sugar. Per Georg Jensen, Mac Baren’s master blender then added Dark Virginia and Burley for balance. The outcome is then hot-pressed into flakes. This allows the tobacco flavors to combine optimally and to mature through a light fermentation.

Despite all these measures, the HH Rustica still has a very high nicotine content, and is one of the strongest, if not the strongest tobacco in the Mac Baren range and is certainly one of the strongest pipe tobaccos in the world. If you like Mac Baren’s HH Bold Kentucky or if you are a fan of Gawith Hoggarth’s Dark Bird’s Eye, Kendal Dark, Dark Flake, Brown Bogie or Black Irish, you may enjoy this. Otherwise the aftereffect would feel like you’ve had a lobotomy.

I recommend that you eat a hearty meal and use a small pipe before trying this. This is probably the most extraordinary tobacco in recent years and is an absolute pleasure.

By the way, Mac Baren HH Rustica is a Limited Edition offering of only 7,100 numbered 3.5 oz. tins, and when they’re gone, they’re gone!