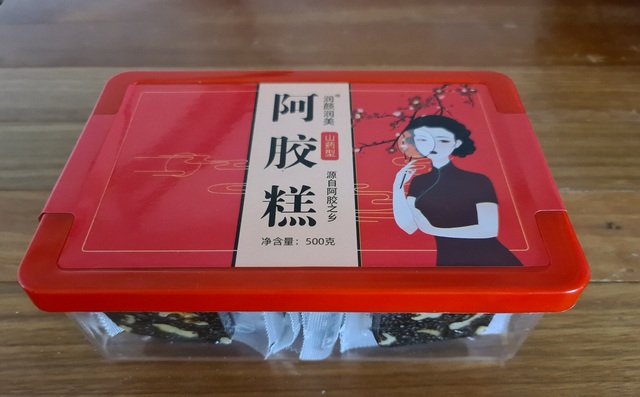 Jian Qing gave me two boxes of candies made from donkey-hide gelatin.

Although ejiao is one of the oldest and supposedly most potent forms of traditional Chinese medicine, very few people outside China know about the ejiao cure-all. In fact, some Westerners may be skeptical of the way it’s made: soaking and stewing a donkey’s hide until it becomes gelatin, and then using it in a number of ways.

In Dong’e county of Shandong province, where the best ejiao first originated, there are now 100 factories which produce ejiao-based products, and the largest, Shandong Dong-e E-Jiao, employs 10,000 people, around 5% of the entire county’s population. It is also a publicly-listed company on the Shenzhen Stock Exchange.

Of course, animal lovers are up in arms. “World’s donkeys being decimated by demand for Chinese medicine,” screamed a headline in The Guardian.

Other reports claimed that tens of thousands of donkeys go from Egypt to China, that donkeys are being stolen and brutally slaughtered for their hides, etc. PETA even released “eyewitness footage” showing baby donkeys being bludgeoned to death with sledgehammers or killed by having their throats cut. Er, how do you steal a donkey?

A study by a British charity dedicated to protecting donkeys says soaring demand in China for ejiao has left the global population of the animal “in crisis.”

In April 2011, the founder of the same charity named an orphaned donkey foal after Prince William in honor of the Prince’s then upcoming wedding to Catherine Middleton. The founder said at the time, “It’s a real honor to have Prince William with us and I can’t think of a better name for him, thus to mark the occasion of the royal wedding.”

You get my point.