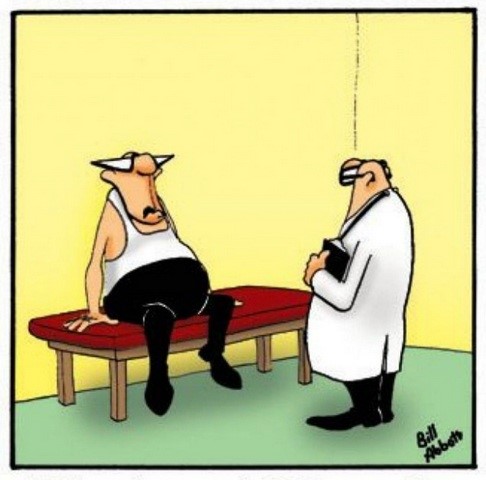 “Where’s my pain? You met her in the waiting room.”

A friend, a retired pastor, was chatting with me and I learned that all his kids are grown and are now no longer living with them.

“Great,” I said, “now you and your wife have more time together!”

He responded “No, we end up quarreling all the time.”

This coming from a pastor – one of the few good ones and not a parasite like many others.

The empty nest can throw us off-kilter. Growing older with less stuff to do and becoming grouchier (for me, it’s largely due to physical pain caused by a bad back) add to the volatile mix. I don’t want to end up being a complaining, bitter old man to whom small things appear big and big things (like lose weight, get a haircut, exercise more, eat less carbs – all big things in my wife’s perception) are often not addressed.

That empty nest can lay bare more fundamental issues and differences. Ironically these differences were the qualities that usually attract people to each other when they were courting. But as people age, tolerance levels can go down and what was once sweet and cute can appear irritating after having spent decades together. Buried resentment and unresolved anger can rear their ugly heads. So conversations can turn grating but I try not to have the last word. However, I often cannot remember to put brain into gear before engaging mouth. That and my sarcasm and tone can be tough for my wife, making life with me quite unbearable at times. Outside the home, because of what I do for a living, people expect me to be wise and witty and to be a superlative raconteur of enthralling tales. I made the mistake of thinking my wife expects that of me. I realized that no, though her title may be “She Who Must Be Obeyed” I don’t have to be wise and witty at home, and definitely don’t have to “perform” for my dear wife, who has accepted me – warts and all – a long time ago. I just have to be myself – the good side, that is – and not speaking will not cause anyone to suspect that I have become dumb, that the cat has got my tongue.

I’m thankful we are both still working – she more and me less, much less, (last year I made a princely sum of only S$5,800/- and I still haven’t’ been paid, by the way) but at least we are not at home all the time tearing each other into shreds.