Hold My Hand As I Go 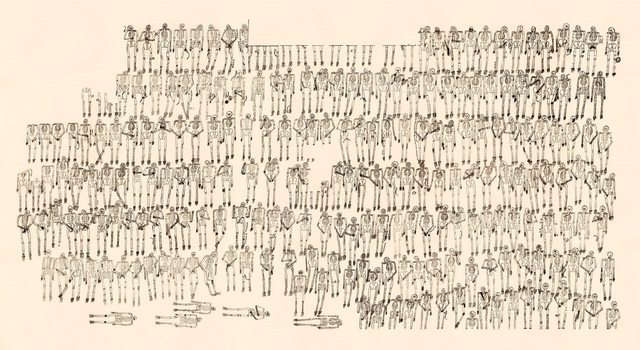 Archeological digs of the ancient Greek town of Chaeronea unearthed the remains of a military unit known as the Sacred Band.

Comprising 300 warriors from the city of Thebes, it was among the most fearsome fighting forces in Greece, undefeated until it was wiped out at the Battle of Chaeronea, in 338 BC – an engagement during which Philip of Macedon and his son, the future Alexander the Great, crushed a coalition of Greek city states led by Athens and Thebes.

What I find fascinating is that the Band was composed entirely of lovers: precisely a hundred and fifty couples, whose valor, so the Greeks thought, was due to the fact that no man would ever exhibit cowardice or act dishonorably in front of his beloved. In Plato’s Symposium, a dialog about love, there is a remark that an army made up of such lovers would “conquer all mankind.”

Indeed, skeletons excavated in the mass grave reveal that a number of warriors were buried with arms linked, some were holding hands, as the sketch above shows.

I would consider it an honor to die with my wife holding my hand, or better still, to die in my wife’s arms.

My wife is one selfless woman who made sacrifices for me, who stood by me despite my follies, who subjugated her own desires to allow me to attain my aspirations, who suppressed her own ambitions so that mine may be lifted, whose circle of friends have reduced drastically over the years because her overriding focus is always on me and on our children.

Her life is never a “me” thing, hers is a life dedicated to making sure that other members of the family realize their fullest potential.