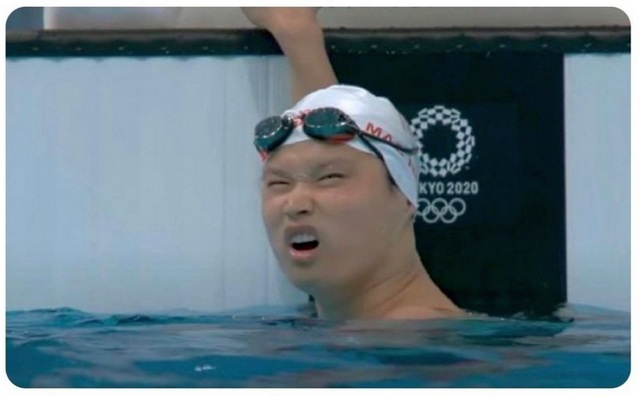 To me, the Olympics is a non-event.

It shouldn’t have happened, considering how incompetent the Japanese have been in dealing with the pandemic so far – there goes the myth of Japanese efficiency – but money, politics, pride and stubbornness got in the way, and so a half-assed Olympics is being dumped onto the world.

The only part of the Olympics I can truly relate to is the Canadian swimmer Maggie Mac Neil (above) who didn’t realize she won gold because she wasn’t wearing her glasses in the pool.

One I found rather anger-provoking was the news that a Taiwanese TV host was attacked by Chinese netizens and lost sponsorship and endorsement deals because she referred to Taiwan’s Olympians as “national” competitors.

Many outside mainland China have found themselves targeted by Chinese state media and Internet users as Chinese emperor Xi Jinping encourages his minions to take on those seen as trying to split or weaken it.

“I asked at the wrong time. Should have been more careful of my words,” Furukawa – with his tail between his legs – said, after deleting the original post.

Another scrotum-less retard was US actor John Cena who in May was cowering like a frightened, weepy puppy after having incorrectly indicated that the island of Taiwan is a country in a promotional video for his film Fast & Furious 9.

Cena apologized to Chinese viewers through a clip posted on his Weibo account, saying he had made a mistake and he was very sorry about it.

“I must say that now, very importantly, I love and respect China and Chinese people,” Cena said in hardly-passable, laughable Mandarin in his video.

I almost wanted to offer a pacifier for that loser to suckle. Might stop his whimpering.

The threat of losing market share in the world’s most populous country has prompted sports leagues, sellers of branded goods, airlines, multinationals, even makers of tobacco pipes, etc to behave like docile slaves before the Chinese and to correct perceived political slights.

But a word for the Chinese of China: for centuries in the past, you may have been bullied like rats and trampled on like cockroaches, but that doesn’t mean it’s now your turn to bully others.

Remember what goes up will and must eventually come down.

No one can be piggish forever.

If you claim to be the product of years of glorious civilization and rich culture, then act like it.

Unfortunately, I don’t see much evidence of that; what I suspect is that bacteria is probably the only culture some of you have, seeing that spitting seems to be a national pastime in China.